So guys this is looking to be a Virals week!
Tuesday and Wednesday are still going to be the regular meme days, so TTT and WFW, but on my review days I'm going to be doing the Virals books!
I got asked if I wanted to review the latest book by the publisher, and seeing as I hadn't read the other books....they where kind enough to send me the first four, so I've been trying to work out what to do and this is the plan I came up with! So today I've got the first two books for you! 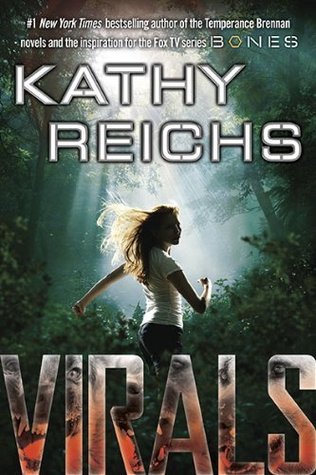 Tory Brennan, the niece of forensic science genius Temperance Brennan, has been sent to live with her father, marine biologist Kit, after the death of her mother. Not only does she have a long lost father, but it turns out he lives on an island off the coast of South Carolina where his work is stationed. Kinda cool huh? Tory and her band of sci-philes pretty much only have each other, what with all the kids at their school being super rich and super snobby.

It's on one of the gangs trips to a neighbouring island that they make a discovery that will change their lives forever. They find a dogtag, and it's the group's determination to find the owner that leads to them breaking in to a lab, rescuing a dog caged for medical testing in an illegal experiment and being exposed to an experimental strain of canine parvovirus that gives them.....kinda awesome powers.

Oh, and leads to them finding the skeleton of a girl who's been missing for 30 years. In order to solve the cold case murder, and stay alive while doing it, the gang are going to have to work out how to use the new gifts the virus gave them, heightened senses, animal quick reflexes and so on, because the murderer has a lot to lose if their crime is discovered, and will stop at nothing to make sure the past stays buried.

Okay so, I've never read any of the Bones books, but I do watch the TV series, always have, and so I was squealing at all the references to Tempe and just generally being a fangirl to be honest!

This is a fantastic start to the series, it sets the ground, establishes everything easily and with as much  info as possible without slowing down the pace or sacrificing the plot. I was drawn in from the beginning, how could you not be!?

When reading I constantly wanted to know what happened next, I couldn't put the book down, you're trying to put all the puzzle pieces together along with the gang. I was constantly shocked and surprised, there where so many twists and turns I didn't see coming!

The setting was vivid, I could picture everything, and felt like I was there with the characters, and to be honest I wouldn't mind visiting! The book was written very atmospherically and cinematically, it could totally be a TV series (hint hint). I just loved all the ominous little comments made in the narrative, it kept you reading, and kept you interested.

The narrative was totally engaging, to came across as kind of chatty, helping you start to get to know Tory before anything actually happened! I loved Tory, I connected with her instantly, the book gave me a real feel for her as the story went on. I'm willing to bet her mum's car accident may not have been an actual accident, but then again, maybe I just watch too many episodes of Bones!

Each character was well written with depth and dimensions and you want to know more about them, particularly Ben! You kinda get a feel for him, but he's quite stoic so you're still left wondering. I loved each of the other members of the gang, they're each different, with their own distinctive personality, and I loved everyone, I mean....how can I not?! They all fit together perfectly, they're funny, they're super smart and yeah...they're a great group of characters!

Secondary characters are also well written, Kit, poor clueless Kit, I dislike Whitney, she's annoying and I protest the fact that Whitney is forcing Tory in to doing something she doesn't really wanna do! But yeah...she's irritating. Jason is interesting....it's going to be intriguing to see where the two of them go, and I'm also intrigued by Chance, his life is hinted at, but it would be interesting to see him more! I actually became really attached to the characters in the book!

Virals is action packed, the world sucks you straight in and you're totally engrossed in the book and find it impossible to put it down. There's plenty going on in the book, there's never a dull moment, which is what draws you in as much as the characters.

Virals has this cool blend of science, forensics, crime, mystery, and then like....I'm not sure how to phrase it cos it's kinda science, with the whole DNA merging with theirs, it's kinda like supernatural or fantasy or something, it's this blend of fact and fiction and real and imagined, and it's so well done and so totally awesome. This is like a crime/episode of Cold Case but with a cool twist to liven it up a bit!

Excited to get cracking on the next book! 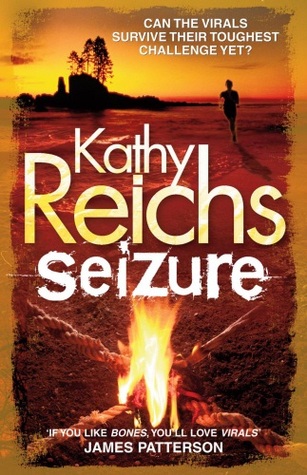 Our Virals have just finished doing time (grounded not jail) for the escapades of the first book, when the news is broken that the University is out of cash, which means the projects on the island are going to have to be shut down. Which means our gangs parents are going to be out of jobs and homes, and it looks like the Virals are going to be scattered unless they can come up with some serious cash.

So it's just as well that while at a fancy debutante party, Tory comes to learn about famous pirate Anne Bonny, who pirated the seas in the 1700's....and more importantly...her treasure. The location of the treasure has never been found, but Tory is convinced this is their only shot at saving their home, so a pilfered pirate treasure map later and the gang are off deciphering riddles and following clues.

However, someone else is looking for the treasure, someone who's following them and who's willing to leave a trail of bodies, can the Virals find the treasure first? Before the island is sold? And can they cope with their ever developing abilitites?

Okay, I can't get enough of this series, as I type this I'm about 60 pages in to the third book, and I can't even. So far each books has been drastically different, I'll explain more in the next post on Thursday, when I do books three and four, but so far this series is one you can re-read again and again.

Each book has a different vibe, the first book was like a murder mystery, with a cool twist, with all the powers and stuff, like an episode of Cold Case, this book is full adventure/quest, heavy on the history and had total Goonies, Relic Hunter/National Treasure/Indiana Jones vibes going on. Like seriously!

This book goes further back in time than the first book, and this book had way more history. The first book was kinda historical, but it wasn't that far back in time, and it was more about finding a killer and solving a case and so on. Whereas this book went further back in history, and was more heavier on the history, you learn loads about this particular pirate, and man I loved it! This was like the kinda book I long for! History, cool quest, and action and adventure.

I loved reading all about the history of the area the book is set in and the pirates of the area, and I actually didn't realise Anne was a real pirate until I googled something, and then I was blown away at the pure amount of information stuffed in to the book, that actually fit in there, and didn't overwhelm the book. The information was inserted in such a way that you wanted to learn more and weren't bored by it. For instance, my Amazon basket now has a crap load of pirate books!

The clues where great, the background and the history was true and it was very exciting and the life and story of Anne Bonny was expertly woven with the clues leading to her treasure, it all made sense. Every clue left fit with Anne and it just made sense that if she had left treasure and a map then that is a clue that she would have left. It was believable, you could believe every word on the page even the ones that weren't actually historical and where fiction.

The plot was complex, lots of little clues threaded the story, not just ones to the treasure but ones as to who is following them, there's plenty of suspects presented to you and it's fun to work out who it is, as well as trying to work out the clues to the treasure for yourself. And ya know...fail because the series continues to be full of twists and turns and surprises, and totally impossible to guess.

The complex history of the pirates and the map, the cool clues, all of it was all thought out, and like I said the logic fit together so well with the historical figure of Anne that it was such a draw when you where reading. You where drawn in from the first atmospheric page, standing on that ship with Anne, and from then the book was impossible to put down because you had to solve the clues and you wanted to know what happened to Anne.

Our characters are still as awesome as ever, I enjoyed that they didn't get their powers and that's it, end of that thread, they use them for good and so on. I LOVED that this plot thread is left open still, the gang are still learning about their abilities, there's new traits developing, in Tory's case she can smell people's emotions, and the flares are changing, and things are still evolving and it's another point of intrigue, waiting to see what's going to happen next with the powers, what other cool things they can do.

Chance was back in this book, and while he was a bit of a douche at the end of Virals, I'm actually glad because his character interests me. He clearly has had a crap childhood, and it was nice to see more of him and get to know him better and I hope he pops up again, because he could be a fun addition to the group!

But most importantly, there was a cameo from Bones too! I LOVE Tempe and I was so excited to see her and Tory interact, and it was so awesome and oh my God. Perfect.

So far both books have been very slick, with the writing, easy to get lost and disappear in, with engaging narratives, and complex plots, each different from the other. Seizure is a blend of history, mystery and action, with an adventure quest type vibe, and a heavy dose of history that's fascinating and exciting to read about. I'm interested to see which road the third book is going to take! I'm totally addicted to the series so far.