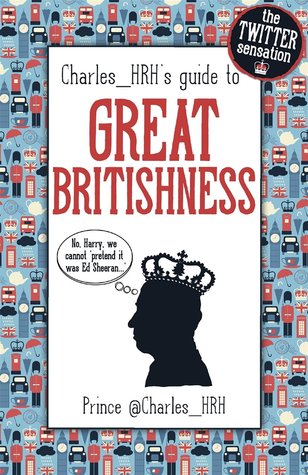 There are plenty of guidebooks on Great Britain, but none have been given the all-important Royal Seal of Approval. Who better to teach the world than the heir to the throne?
His Royal Highness will cover everything from History ('Might have to sell France to pay for Richard III's car park fine') to British cities ('If you're wondering why the British are so good at cycling and rowing, take a look at the cost of public transport') and The Arts ('The Madness of King George III - fantastic film. Americans didn't go to the cinema because they hadn't seen the first two. Awkward)'.
Tackling the all-important issues such as why we Brits can form a perfectly ordinary queue with just two people, or why we love a Full English Breakfast despite the fact it contains 465,873 calories, Prince @Charles_HRH's Guide to Great Britishness is a hilarious romp around our Sceptered Isle.

I haven't done my own synopsis this time, I've used the one from GoodReads because I couldn't come up with a better description!

Okay so this book is perfection, I was laughing the entire way through, the book was informative and totally hilarious, and to be honest, it's a good book for us Brits, but also for any friends you may have coming to visit from another country! It'd be a fun gift to give! Stocking filler perhaps? I can see families sitting around reading out loud bits and pieces from this book and doing the quiz at the back! I mean tourists are gonna love it as well.

It's one of those times when a fake account doing a book REALLY works. Everything is written as factual, even when the book is clearly pulling your leg and it is sometimes necessary to have a Google, just to check, I mean OF COURSE, you know the truth of it...but just in case....

The jokes are mostly easy to understand/get, but there's a few when you need a bit of knowledge on the subject or the person, but mostly it's smooth sailing and the jokes are rolling. I don't think the French will find the book as...amusing as the rest of us...there's a lot of fun poked at them and the entire "this is why we hate the French" thing going on.

The book covers a lot, the history of Britain, The Royal Family, The Government, which ya know....was suitably hilarious, and fun was poked at certain individuals. There's also film and tv and books and food and alcohol, and pretty much everything you can think of. The observations on certain people and events are incredibly witty and cutting.

There was rather a nice section on the Underground which was oh so true, let's be honest, not to mention the section on Haggis and the X-Factor. I was going to put a couple of quotes in this review, but honestly, I really couldn't decide so I left them out to save myself from an incredibly hard few hours trying to decide!

It's kind of hard to review this book, but it can be read in one sitting, all the sections are the right length, the book is concise, witty and cutting, and obviously hilarious, and it's a lot of fun, you can quote it all day long!