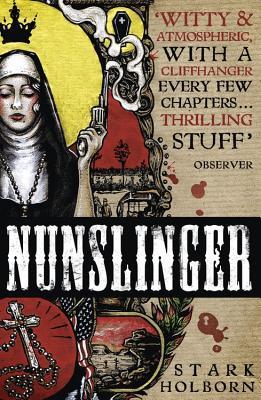 The year is 1864. Sister Thomas Josephine, an innocent Visitantine nun from St Louis, Missouri, is making her way west to the promise of a new life in Sacramento, California. When an attack on her wagon train leaves her stranded in Wyoming, Thomas Josephine finds her faith tested and her heart torn between Lt. Theodore F. Carthy, a man too beautiful to be true, and the mysterious grifter Abraham C. Muir. Falsely accused of murder she goes on the run, all the while being hunted by a man who has become dangerously obsessed with her.

Using GoodReads synopsis because I couldn't have said it better myself without giving everything away in my excitement! Well, this was an engaging, funny and unique read! I mean....a nun who turns in to an outlaw of sorts, being reported in the papers for her daring deeds, with a liiiitttle bit of romance. I mean, I loved it! I wasn't sure what to expect and I ended up being totally surprised, the book is quite hefty at like 600 pages, but the chapters are short and it's easy to read and you end up speeding through it, because you just have to know what happens next.

I'm really glad I got  to read this all in one, reading the little books separately and then waiting for the next one? Hell no! Each of the "books" ends leaving you wanting more, so when you have the complete series, it's pretty much guaranteed you won't be putting the book down until you've finished it! I loved the little bits at the beginning of each book saying what was going to happen, it intrigued you and added some excitement of the "oh my God I can't wait" variety!

The setting was vivid, and very well described. It's very gritty, there's no making the setting and the time all pretty and romantic, it's portrayed as it would have been, violent and dark and slightly grim, with an atmosphere to match, although the atmosphere does change, it still consumes you. The world created is a world you can get lost in and it doesn't half make you want to watch one of the old Western films!

Now I know I said the setting is quite dark, meaning the whole hanging and dodgy goings on, but that's okay because while something really shitty or violent or both might happen, our two main characters, Sister and Abe, will make you chuckle, I even found myself starting to quite like Colm. This book is incredibly funny when it wants to be, as well as serious, with action and fighting and daring escapes. It's like a Western movie in book format and it plays like a movie in your head.

The characters are all written incredibly well, you get a real feel for them and their personalities, they have plenty of depth and they're....colourful, shall we say? None of them are arty farty, totally useless and floating around being all dashing and so on, well, except for Templeton, he's a bit useless, but even he managed to redeem himself! Abe, Colm and Sister are all very gung-ho, they're all capable of taking care of themselves and they're all intelligent and quite cunning. Except for that one time they did need rescuing, but it was suitably daring and dangerous! I loved how all of the characters could stand on their own, how they where all strong and brave and full of courage, although it could probably said at times it was stupidity, at least from the blokes! I'd even say Colm and Abe where oddly charming!
The characters where easy to love and connect to and empathize with.

The plot was a rollercoaster, going from danger, to daring escape, to rescue mission and so on, there was always something going on, there was never a dull moment and the plot flowed easily from point to point, organically growing and changing and throwing situations at the characters. Nothing felt like it was out of place or just there for the sake of some drama, everything with the plot made sense and fit. It twisted and turned and was full of surprises and shocks, nothing was predictable, there so many times when I was like "shit...they're done for" then the narrative was like "Oh no, have no fear, they're more intelligent than you are and unlike you if you where in this situation, they're gonna kick ass and escape in a totally ingenious way". I could not tell what was going to happen next and I LOVED it. It was complex, there where lots of threads that came together perfectly to make up the plot, including the over arching plot that I reaaaalllly did not see coming!

Not only is Nunslinger a very pretty book, but it's a book that is totally unique. When was the last time YOU read a Western about a nun and her growing reputation as a badass? Never, I hear you say? Correct. Unique. Through and through.

Nunslinger is fast paced, full of thrills, danger, daring escapes, bad guys, and plenty of action. Never a dull moment, the book takes you on a vast journey across the US and even in to Mexico. Nunslinger has pretty much everything you could want in a book, it's humour balances the violence and occasional darkness of events, not to mention the betrayal and the sense of "man I've never wanted to punch a fictional character more" feelings that where abundant. I honestly, never wanted the book to end, and then it did, but it leaves you with a little teaser where you realize maybe it's not entirely over, maybe what you thought happened didn't happen.

To be blunt, this book is a must read and I'm going to be keeping an eye on the author to see what he/she comes up with next! Oh and don't be alarmed about the "romance" I told you about. It's subtle, very subtle, it's there but it's not the main thing and the book isn't all about it. The authors awesome like that.
Posted by Alisha at 10:00