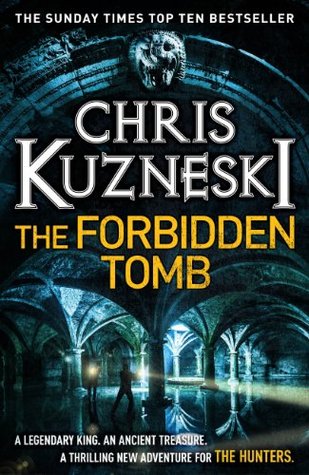 It's one of the worlds biggest mysteries, where is Alexander the Great's tomb located? For two thousand years his tomb's location has remained unknown, many have looked, but none have found it, there's many a theory but none have been proven right. Now, there's new information, information that has given a huge lead on the location of the tomb. There's only one team that can follow the clues and find the location of the tomb, solving the mystery that has plagued Historians and History buffs for centuries.

The Hunters, our favourite elite group of many talents, assembled by an enigmatic billionaire to locate the worlds  greatest treasures, are tasked with finding the tomb. They follow the clues to Egypt, and from then on...it's not exactly smooth sailing. There's a hostile group of...well....ninja's, determined to stop them, and they're not above destroying all the evidence linked to the tomb....or kidnapping a team member. Not to mention Sarah's contact in Egypt has an enemy who has decided that Sarah is the perfect way to get to him.

It all started as a treasure hunt, but it quickly becomes a rescue mission when hundreds are killed, a city is left in ruins and in all the chaos a team member is kidnapped, it's a race against time to save said member, before tragic consequences ensue.

*squeeeee* I LOVE THIS  BOOK! Okay, when I was younger, I loved Alpha Force, and I know they where totally different to the Hunters, but this series really reminds me of an adult Alpha Force, but with treasure instead of random missions, you know? I seriously can't get enough of this series. It's everything I love, there's humour, action, adventure, quests, clues, history, ancient treasures, banter and everything that makes a book so fantastic. This is really a series that can be read again and again.

Although, I'm kind of pissed at the author for a certain event. And I know he knows what event I'm talking about! HOW COULD YOU!? *ugly sobbing* damn I didn't see it coming. Because you know, I was all "it'll be fine, it'll be aaaalll fine" and I really wasn't expecting it to be honest. That's the beauty of this book, the plot is nice and complex, there's lots of different threads, there's the whole thing with Simon, then the expedition in April, then our team following the clues and the rescue mission and so on, all woven in to one story so expertly that there's plenty of intrigue and you can't put the book down! There's loads of plot twists that I, for one, couldn't work out, so I found myself being pleasantly surprised, or totally shocked, or kicking myself for not realizing something.

I was trying to follow the clues, but I was in the same boat as the team, whatever they knew or thought, so did I, I had theories, but all where proven wrong. Which I actually enjoyed, because I hate being right when it comes to books and what's going to happen next! I myself don't know much about Alexander the Great and his tomb, and the book has clearly been well researched, I learned all about Alexander and his achievements and what happened when he died, and how the tomb became lost and the author presents a believable theory for the location of the tomb. Yes I did google after I finished reading, and I did learn it's thought the tomb is in a couple of locations, one of the front runners being the one the author mentions.

All this information is relayed to you in the right places in the story, at the right time, concisely, there's such a lot of information but it's included in the narrative so well, that it doesn't drag the fast pace down and while all of the information is relevant, it's actually interesting as well and not just there for the sake of it.

The setting was very vivid, I've never been to Egypt, it's on my to do list, but after reading this, I really got a feel for the place, and it's almost like I've been there, I could picture everything so clearly, and it was like I was there with the team, tagging along behind them! Everything is described so concisely, yet with enough detail to give you a mental snapshot, not to mention the atmosphere generated by the prose. It's a world you can really sink in to, and get wrapped up in the tension and the action and you don't want to leave the team at the end of it.

I love all the characters equally. Really. Seriously....I do....okay. So, MAYBE I might love Sarah a SMIDGE more than the others. Maybe. All of the characters are so colourful and full of depth, and each brings something different to the team, but they all work so well together despite the banter, which had me chuckling like a mad woman!

So basically, I really love this series, this book is perfection, history geeks are gonna love it, as are people who love a good clue trail, I mean Indiana Jones fans.....Alpha Force fans who are now older and historically inclined are gonna love this, I'd be here all day essaying why I love this book to be honest! It's action packed from start to end! I really can't wait for the next book, well I'm hoping there's a next book! I NEED MOOORRREE! ;)
Posted by Alisha at 10:00