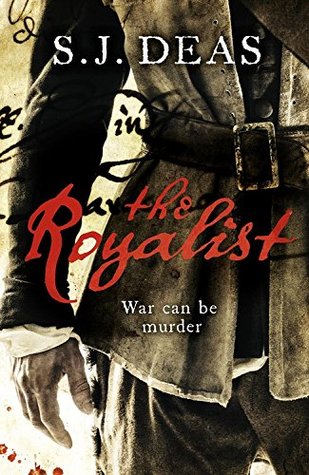 William Falkland is a dead man. Due to be hanged for fighting against Parliament in a Royalist Dragoon, which means he's been getting well acquainted with Newgate Prison. One day, a day he's assuming is his execution date, he's led out with a sack over his head, but instead of taking a short walk to the hangman's noose, he finds himself face to face with Oliver Cromwell.

Cromwell has heard of Falkland's investigative skills, but more importantly, that he stood up to the King and hung a guilty man in the name of justice when ordered to let it go, in short, he knows that he's a man of conscience, which is exactly what he needs. You see, his New Model army has a problem, it's a nest of vipers, full of untrustworthy people, and there just so happens to have been a slew of deaths sweeping the camp in Devon. All Falkland has to do is discover the truth, and he's a free man.

The Royalist sucks you straight in to the world, the time and the setting. It's very vivid and atmospheric and you can easily get a feel for England at the time. The politics of the time and the circumstances are very well explained without giving you too much information so you're bogged down, you're concisely told everything you need to know, to have a picture of the current war, the politics, the religion and so on. I actually have a better understanding of that period of time than I did before, I knew the basic details and have read a couple of books set around the time, but none with this level of detail that gave me this much understanding. It's clearly very well researched and all this research is relayed perfectly, giving you only the bits and pieces you need.

I found the setting to be, like I said, vivid, and very colourful. I thought the setting was quite unique, I mean the books I've read around this time period where either from the Royalist side of things, or where focused in London, I've not read a book that is set in the camp of the New Model army, nor read one that reveals just how flawed the army was with the press ganging Royalists, and the clashing religions and so on. You got a strong sense of the uncertainty of the time, and the fear and superstition.

I know I keep going on about the politics and how well explained it is, but seriously, usually when I read books like this, I get so confused and have no idea what they're talking about. It's so well explained, the politics and religion etc, that when the big reveal was made or the plan or whatever you want to call it, I immediately understood the implications without having to wait for the proper explanation and that is a really rare occurrence for me!

The characters where well written and had plenty of depth, it'll be interesting to see more of Falkland. I was very suspicious of Warbeck in the beginning, and he turned out to be way different than I thought he was and had way more going on than first appeared! Miss Cain was very brave and strong, and Falkland was well....he was a deserving hero, he earned the title. I was impressed with how he wasn't swayed by people and his intelligence, usually I'm shouting at the book because it's SO OBVIOUS AND YOU'RE NOT GETTING IT, but with this I was like "oh thank God he has a brain!", I was following his same thought process, so I didn't have an advantage on him or anything like that. The plot twists and turns where shocking to me, I couldn't predict them, I had theories sure, but all where wrong.

The plot was complex, there where layers as all was not as it seemed and there was a lot going on. The Royalist was a very enjoyable and refreshing read that gave you a new understanding of the time and the New Model army and how it was anything but united, there was one niggling little thing though. I felt like the ending was a smidge rushed, it wasn't as strong as it could have been, it just fell a bit flat.