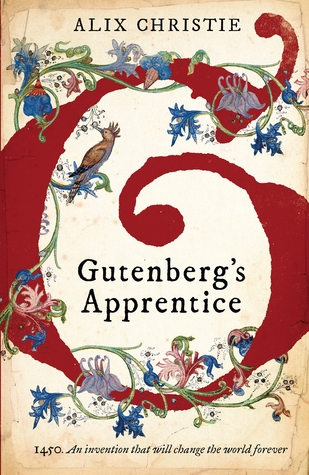 Gutenberg's Apprentice is the tale of a young German scribe, called home to be apprenticed to Johann Gutenberg, who just happens to be the guy who printed the first Bibles. Peter has to come to terms with the fact that the trade he loves is a dying breed, and soon will be obsolete in the face of printing presses. But will he be able to finally find the beauty/genius in these new printed books? Change is everywhere and we get a front row seat to it!

Okay...I gave it three....hear me out. I know everyone loves this book, and I was very excited to grab it from Bookbridgr to review, and while I did find it fascinating, I had to be honest in my review. Don't get me wrong, a lot of the bits to do with the first press and everything they faced was fascinating/interesting/mind boggling/stupendous, and so on, but for the most part I did find it hard to get in to and to actually concentrate on and come back to it if I left it, I also couldn't get a connection to the characters, the characters lacked depth in themselves and their relationships, I'm not too sure if this was on purpose or not.

The writing was beautiful, the descriptions intricate, but that also came with the downside that there was so much description it slowed things down for me. I mean, the writing was incredibly formal sometimes, very technical and history bookish, and it kind of kept me, as a reader, at a distance, I felt very disconnected from the characters, I could see some of them had very interesting personalities, and they all seemed quite promising, but there wasn't the right depth to them, they could have been explored so much more. There's a lot of bickering between the characters, particularly those working with the press, I mean....maybe it was a little bit bantery at points, but there wasn't much in the way of positive bonding between the characters.

I was quite disappointed we didn't get more of a glimpse in to characters lives, I mean we got loads of Peter's and it was his story, but there could have been more of the others! I didn't really feel much for Peter, I thought he was a bit ridiculous a couple of times, and he annoyed more than once, I mean it's hard to explain without giving much of the story away! I didn't like him nor did I really dislike him.

We're reading at the time of the press, but we also jump ahead in time, 35 years if I remember correctly, to Peter telling the story to an abbot who's writing it down, for me, these little jumps just seemed a bit like they where there purely for intrigue or a break from the narrative. Which isn't bad, but I didn't feel they had much point, but maybe I was missing something because it did reach a point when I wasn't paying too much attention!

The author gives us a wealth of information, all of which is historically accurate and clearly well researched if not necessarily relayed in the best manner. However, there where a lot of historical events that where going on around the time of the first press, all of which where crammed in to the book, a couple where delved in to with lots of detail and focus and so on, while the majority weren't delved in to deeply enough, which was a shame seeing as they where all crammed in there, there could have been appropriate detail on all! While I did find it fascinating, at least the ones explained in depth, if a little bit of a slog to get through, I felt that the majority weren't given the right amount of attention, and not all of them where really necessary seeing as none of them had much bearing on making the characters more pleasing to me to be honest! They contributed to the world building, but the ones that weren't given much detail where just like "why are you here?!".

This is just my opinion and me being honest, and I really wanted to love this book, the writing was beautiful, it was clearly well researched and historically accurate, and the world was fairly vivid and intricately detailed, I just found myself losing interest a couple of times and being kind of bored when I wasn't fascinated, but then maybe I just read this when I wasn't in the right mood!
Posted by Alisha at 10:00