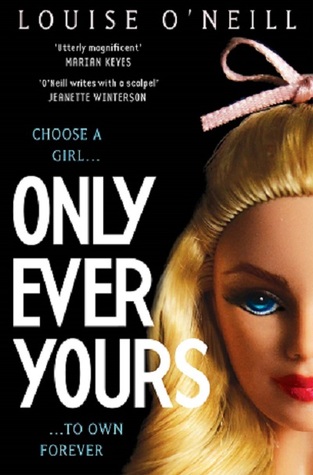 Only Ever Yours
Rating: 4/5
Buy or Borrow: Buy
Source: Copy courtesy of the Publisher!

frieda and isabel have been best friends their whole lives.Now, aged sixteen and in their final year at the School, they expect to be selected as companions - wives to wealthy and powerful men. The alternative - life as a concubine - is too horrible to contemplate.But as the intensity of the final year takes hold, the pressure to remain perfect becomes almost unbearable. isabel starts to self-destruct, putting her beauty - her only asset - in peril.And then, the boy arrive, eager to choose a bride.frieda must fight for her future - even if it means betraying the only friend, the only love, she has ver known...

Wow, this was suitably chilling and mildly creepy in certain parts. The society in this book is truly sickening, it's a society that you absolutely hate while you're reading, and I very nearly gave it a 3 star rating because of this, because it reached a point where I was more morbidly fascinated with it rather than actually enjoying it. But it's a good book so 4 it is. This book really hits you hard, and it makes you think because it really showcases some of today's issues in society, and it gives you quite a hard look at them as well. It's fascinating and mildly horrifying.

It's a very futuristic book, despite dealing with modern issues. The futuristic aspects where quite interesting, and the world was fairly well built considering we don't actually see much of it, we just hear about it. The weird thing for me was the whole thing with Darwin because I usually read happily ever afters and there's no such thing in this kind of book, so the book has stuck with me, and will stick with many people for different reasons.

For me, the book made me uncomfortable, and because of this, I think, I thought it was a bit too long, because the book was so uncomfortable to read and it was fairly horrifying and everything, it got a bit repetitive at one stage but it did make it's point.

One point I loved about the book, was how it was written. It was very well written, and very thorough, the girls didn't even have capital letters to their names because they weren't worth a capital letter, you know? So much attention to detail, it was incredible.

It's not a book I'll re-read again and again, and I didn't love it, but I didn't hate it either. I felt like there was no conclusion to the book, and I struggled with that because it wasn't like you could come up with your own thing for it that easily. I spent the book being angry and horrified in equal measure and being fairly uncomfortable. Well written, with great world building, and attention to detail, it's an eye opener of a book, that's for sure!

I'm not entirely sure what this review is like overall to be honest, because I wasn't sure how to review it or word it or what, but I've tried.
Posted by Alisha at 10:00

Email ThisBlogThis!Share to TwitterShare to FacebookShare to Pinterest
Labels: Dystopian, Fiction, Futuristic, Louise O'Neill, Only Ever Yours