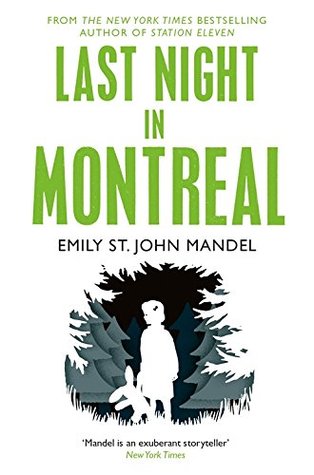 Lilia's been on the run since she was a child, running away from people her entire life, leaving friends and boyfriends in her wake. She's haunted by her inability to remember her child, what do the scars on her arms mean? Where are they from? What caused them? She has no idea, but there's someone who does. Lilia's been moving from city to city, but then she meets Eli, and he won't let her go without a fight.

I love Emily St. John Mandel books, I really do, her books are always gorgeously written and compelling and just incredible to read. Station Eleven is my utter favourite book ever, and this novel was not a disappointment.

I loved how we got little snapshots of Lilia's life, and the relationships she's had before moving on to a new city. The narrative was quite chilling in how broken up it was, you're trying to figure out what happened, why she left her mother, and you're seeing little snapshots of her life, her life with her father, her brother, the detective following her and said detectives daughter. While broken up, the narrative wove together to tell the tale perfectly, and in a more intriguing way than having you know all the facts from the start and taking it from there. I love being kept guessing and wanting to know what the deal was.

You're pretty much in the dark a lot like Lilia as to what the huge secret is that she can't remember, and the plot definitely thickens before the big reveal starts to slowly be...well...revealed. Then at that point all becomes clear, and like I said, I found it quite chilling!

Each character is well written, colourful and very different. The relationships between characters and their conversations are interesting to read. And this is another example of how incredible a storyteller the author is, I'm honestly fascinated by her books, every single time...well....the two times I've read her books you know?

This is one of those books that's haunts you, and makes you consider certain things, much like Station  Eleven, and if you haven't read that, then you're really missing out and need to get on it ASAP! That will probably be my favourite always because it's the first one I read and then the whole acting thing you know? Anyway, this is another fantastic novel from the author, and I'm itching to get my hands on her other two books! Library times are in my future!
Posted by Alisha at 10:00