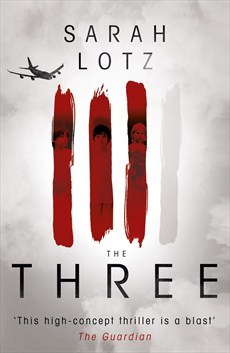 It was called Black Thursday, the day four planes all went down in different areas, within hours of each other, the world is in an uproar and people want answers. Was it terrorists? An act of war? The officials are under pressure to find a mechanical cause to the crashes...but what if there isn't one? Three of the crashes....well they're clutching at straws to explain it away.

Meanwhile there's three child survivors, dubbed as The Three by press. After surviving the children appear to be changed from their former selves and exhibit strange behaviour, not to mention some of the things they say. A rapture cult led by a pastor is convinced they're the horse men of the apocalypse and starts to gain a huge following after one of his church goers who died in one crash, was discovered to have left a voice message about "the boy". But as the fanatics are whipping more people in a frenzy, and the pastor is convincing his followers to do away with the Three, their guardians are starting to suspect something isn't right.....

Oh my God this book was so awesome I can't even begin to tell you guys, my synopsis is also really crappy but like I still haven't processed how incredible this book is and let's be honest it's not often, if I ever that I give a 5 star rating to a book that isn't a YA type of affair. So you can see how this book is quite clearly special.

The Three is a book within a book and it's so well done, with the first little bit intriguing you enough to grab your attention, and then the book was so cleverly done, and I really enjoyed the layout. We have a book written about The Three, inside the book, it's bookception is what it is.

In this book about the "conspiracy" of the crashes and The Three, we see transcripts from IM's, phone conversations, articles, interviews and so on from members of the family and friends of the Three and some of the investigators, and you kind of have to decide for yourself if something freaky is going on, what exactly is going on and you know....decide what you believe about the whole thing, and you're given all this evidence.

Then the end of the book, that's the end of the book inside the book, is like...boom. Mind blown. It details what happens after the book has been written, and that's when you start to realize you where either right or wrong, and that something very strange is going on and has gone on. And then the last little page? Oh my God. I can't even.

I can't being to describe how incredible this book is, it's chilling, it's creepy, it's intriguing, it's gripping, it's spellbinding, you don't want to stop reading, you have to keep going to see what happens next, what's going on, and most of all it's original and so different with it's entire layout not to mention the actual plot itself which is so rich and complex.

The author expertly juggles all these points of view, essentially, and all these sources to create a plot that's utterly captivating and engrossing. Expertly switching from source or POV seamlessly, while keeping a narrative up without having an actual overarching narrative, which doesn't make sense when I type it out, but it does when you read it!

Like I said, I really loved how the book was done, with the transcripts and interviews and so on, instead of one narrative, it was very well done, it was original, and it added another level of awesome to the book, and I can't impinge it being done any other way, the various forms of correspondence worked very well for the book, and showing, very disturbingly, how quickly panic and terror causes people to spiral out of control very quickly.

Like I said (again) it added another level of awesome because it added another level of creepy, there was a foreboding sense, some of the material/sources ended rather ominously so you knew something was up, but not what, and some of the sources including our author are perhaps...unreliable. Is she being truthful? Or has she just picked the bits most likely to cause a stir and make a certain point?

While I did find the creepy children...well...very creepy, I mean it's hard not to think creepy when the kids are acting how they are, I would say this is more suspense than horror, while I did feel creeped out it wasn't to horror level, because I hate horror, because well.....I don't get on well with it because I like my sleep haha!

I know you're all thinking four plane crashes....but three kids....right. I was too, it was a question constantly in my mind, and there wasn't as much material about it, and it's for a good reason, and you'll find out when you're reading, but it's another fantastic point of intrigue, and the UK cover I have is so fitting for it.

The Three gives you glimpses of the lives of the children, and is structured in an original way that works so very well. As you read you'll be intrigued....creeped out by creepy children, there's mystery, you'll be kept guessing, you'll second guess yourself thanks to the uncertainty, and you'll be unable to stop reading, needing to pursue answers. Paul Craddock and Jess in particular, brought the creepiness, it was totally spine chilling, I wouldn't read those bits at night!

This book was downright unnerving, and it's safe to say I'm now a huge fan of the author, and I can't wait to read what she comes up with next! Even if it does creep me out to the max!
Posted by Alisha at 10:00