Hey guys!
The month is nearly over, I've read my classic for the month and it's time to tell you guys aaaalll about it! I wasn't quite sure how to do this, but I'm thinking I'll do it this way, I'll answer the questions here, and then in my videos I'll tell you what I thought of the book! That way the video's aren't really long and there's less of me babbling!
This month's video had some technical difficulties, so there's no actual sign off because I didn't realise it hadn't gotten that bit, so sorry  guys! It's not me being rude!

So this month I picked Pride and Prejudice to read, in case it's not already obvious or known! I actually had a lot to say about it and had a fair few notes, but that's all in the video that I'll link down below! 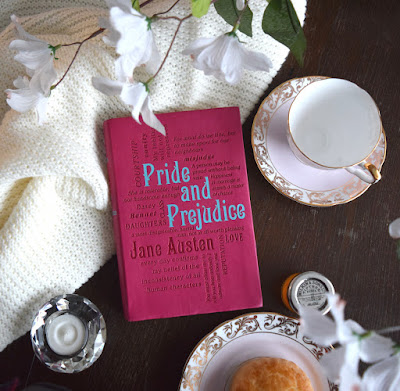 1. When did I discover this classic?

I've been trying to think back to the exact point when I discovered this classic but I really am struggling! We never did any Austen books in school it was Jane Eyre and a lot of Shakespeare with some Of Mice and Men thrown in! I think around about some time when I was in Secondary School, is the answer! It's kind of hard not to discover Pride and Prejudice to be honest with all the adaptions of it floating about and all the merchandise to go with it, especially on Tumblr! I already knew about it but Tumblr just made me more and more interested in it!

Easy. Everyone raves about it and it's one of the classics that I consider to be one of the big, main classics along with Wuthering Heights and Little Women and so on. Not to mention the bits of the film that I had seen intrigued me and I had a feeling I'd like the book because ya know...romance. It's also technically historical these days as well! I've been wanting to read it for ages to be honest, I've not read that many Classics on my own just Dracula and Secret Garden and a couple of others, and seeing as P&P is a main classic, I'm kind of ashamed I haven't read it! I also have loads of different editions of it, because I can't resist pretty books, and I collect certain editions and my logic is that ya know...I'm gonna read it eventually, and I know I'm going to love it so why not?!

I'm probably the last person who should be saying what makes a classic a classic seeing as I haven't read any! I mean, the fact people are still reading it and loving it makes it a classic I guess? Although I think the correct answer is the language of the book, and the romance. Also the setting, a lot of readers love this particular period of time, and it's a romance set in that time. It's a good romance and it's a great glimpse in to the time period and what things where like. I really suck at answering these questions!

I can't really say, things are always changing. I would think that it would because people are still just as interested in it whether it's in book form or film form. I've seen a lot of teenagers on Tumblr who love the book as well so it's not just older generations loving the book either! I think all the film adaptions that are out there will also help it to stay a classic, because you know...a lot of the time people are more likely to watch a book adaption, and a lot of the time someone might watch an adaption and then go and read the book! Not that like..just watching the adaption is a bad thing, it's also keeping P&P as a classic! I think people will always be interested in the time period, it's one that people romanticise a lot and it being a book written at the time, it's authentic in it's language. I think there's something about the language and the etiquette of the time and how things where that interest people, and that people enjoy.

I'm going in to essay territory here! But I also think that the romance is one that can stand the test of time, not to mention the characters! Elizabeth and Darcy are classic characters and you often find characters in modern day books that have aspects of them, or are very, very like them! Everyone loves a romance though, let's be honest!

5. Who would I recommend it to?

For a start, I'd recommend it to people who read a lot, like nothing against people that don't read all that much, but the writing and the language is such that I don't think a casual reader would get on with it, or they would struggle. BUT then on the flip side....it might get a casual reader reading more. So there's that. I'd definitely recommend it to Teens and up, because I think more teens should read the classics. I mean....I regret never picking up all that many classics. I didn't read classics when I was a teen, Dracula and stuff I read when I was younger, I actually got given a copy of Anne of Green Gables by a teacher in primary. But when you're at school reading classics is always a chore a lot of the time, I was lucky because I actually liked Jane Eyre and Of Mice and Men, but being forced to read the set ones at school can put people off, so I think teens should just pick a classic they like the sound of and give it a go! It's great for the vocabulary as well! This sounds really preachy, my bad!

So there you have it! I kinda feel like I'm doing an English Essay and I such at academic things like that so it's rambly and probably all wrong but I tried! I'll do better for February I promise!

Speaking of February....my February classic is going to be *drum roll* Wuthering Heights!
I'm assuming most people guessed seeing as it was my second choice for January, I was hoping to actually read Sense and Sensibility in January because I fancied it after seeing some of the film, but I didn't have time! I have this feeling like I'm going to end up binge reading classics at some point! But yes....Feb's book is Wuthering Heights! No idea what to read for March (which is my birthday month yaaaay!) so any suggestions are welcome! I'll probably do a Twitter people because I suck at being decisive!

Let me know what your classic for the month was as well hitting me with your suggestions! Check out what I thought of the book in the video below!