All The Wrong Questions 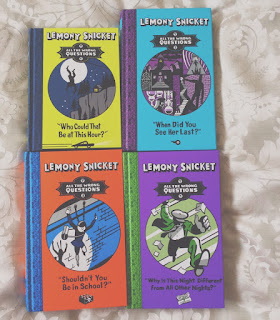 All The Wrong Questions
Rating: 4/5
Buy or Borrow: Buy
Source: Copy Courtesy Of The Publisher

I remember being given the first two A Series Of Unfortunate Events books as a Christmas present when I was younger, and from then on completely loving the series and having to wait for each new book to come out and then devouring it in hours. I was lucky enough to be sent the entire new series from Lemony Snicket to review, All The Wrong Questions. As soon as I started reading, all the memories from ASOUE came flooding back, and I just can't get over the originality of the books! 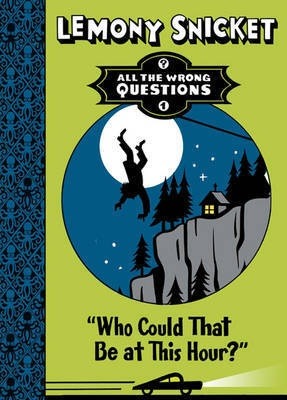 Who Could That Be At This Hour?

Before you consider reading "Who Could That Be at This Hour?" ask yourself these questions:1. Are you curious about what is happening in a seaside town that is no longer by the sea?2. Do you want to know more about a stolen item that wasn't stolen at all?3. Do you think that's any of your business? Why? What kind of person are you? Really?4. Who is that standing behind you?

In the very beginning of the book, it was kind of difficult to understand what was going on. Lemony was supposed to be on a train and there where his parents, and Laudanum laced tea but they're not actually his parents and there's a note dropped in to his lap from a woman. He then goes to the bathroom and escapes out of the window down a ladder. From then on, you gradually start to understand what was going on, and things are easier to understand. It turns out Lemony is an apprentice at a secret organization and the woman is his boss S Theodora Markson. Once they hit their destination they have to retrieve a stolen item, a statue, and return it to the correct owner, but nothing is as it seems and it starts the whole journey off.

I just love the general nonsense of the book, the kids operating the taxi for their father, the nonsense mystery and town with it's missing ocean. The writing style, the descriptions of books that have you stopping to think about which one they're talking about. I loved the word definitions being thrown in, because it was done in such a way that was funny, rather than annoying because it clearly parodied all the times it happens in other kids books. At times I got some Bugsy Malone vibes because for the most part, it was all kids acting like adults, with hardly any adults about.

You don't know what's going to happen next as the plot keeps changing, and it keeps you turning the pages. I loved how Pip and Squeak, the two taxi drivers, asked for tips rather than money, so Lemony will recommend them a book. There are so many references to books and like I said, it's fun to try to work out which ones are being mentioned but I did fail at some!

The book ends with nothing resolved, so you're desperate for the next book to see what's going to happen next. The book has an original and exciting setting, and a cracking little mystery to keep you occupied. 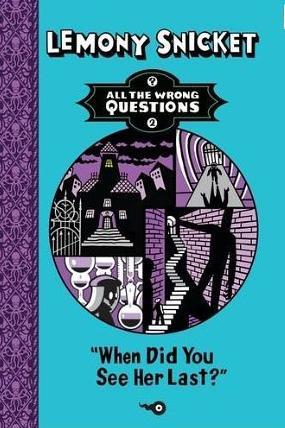 When Did You See Her Last?

In the fading town of Stain’d-by-the-Sea, young apprentice Lemony Snicket has a new case to solve when he and his chaperone are hired to find a missing girl.Is the girl a runaway? Or was she kidnapped? Was she seen last at the grocery store? Or could she have stopped at the diner? Is it really any of your business?

So, this is the second book in the series.....obviously. This time around we have a missing girl and again...nothing is as it seems. It would appear that the missing girl has managed to be in two places at once...or has she. Has she been kidnapped for her formula that would save the town?

Anyways, the story continues on well. There's a little kind of "previously on" section that catches you right up if you have  had a bit of a wait between books. The thing I like most about the book is the characters, and in this one, I just sat there like wow. There are certain characters that  I completely hate because they're so horrible and repulsive, but then there are also funny characters. I must say, I love the Librarian!
I just mention the characters because this time I actually got really annoyed by two of them!

Every time I open one of these books, I'm just struck by the writing and how much I love it.  This is another fun read that takes completely unexpected turn. 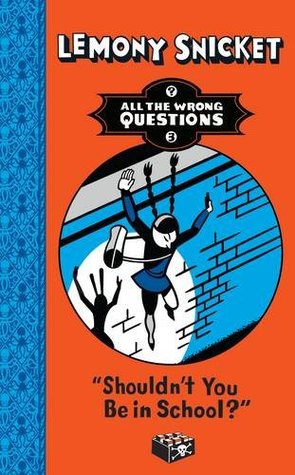 Shouldn't You Be In School?

Do you smell smoke? Young apprentice Lemony Snicket is investigating a case of arson but soon finds himself enveloped in the ever-increasing mystery that haunts the town of Stain'd-by-the-Sea.

Who is setting fires?
What secrets are hidden in the Department Of Education?
Why are so many schoolchildren in danger?
Is it all the work of the notorious villain Hangfire?
How could you even ask that?
What kind of education have you had?
Maybe you should be in school?

Questions, questions, so many questions. So far each book has left us with  more questions and this one is no exception. Particularly in this book you're actually wondering about a character's allegiance and I can't quite work out who's side she's on but I certainly don't trust her as much as Lemony seems to!

This time around someone is setting fires, truant officers of the dodgy variety are kidnapping kids and taking them to a new school which isn't exactly what it seems. Someone's being framed for the murders...but why?

I love the wit and sarcasm of the book so much, but once again I'm never sure if what's going on is really correct, the plot changes so much and half the time I'm not sure whether or not Lemony is pulling my leg. This is the book we FINALLY found out the meaning of VFD.

I find these books so original because of the writing style, unless you read ASOUE you won't read anything like it anywhere else. It's a particular brand of humour and it's one that has me cracking up. This time round I'm rooting for Lemony because I know he can handle himself whereas with the kids from ASOUE I always felt sorry for them and just....so much pity really. I should also mention that Count Olaf gets a mention, and Josephine makes an appearance. I fangirled.

This is also the book, it has to be said, where we finally start to get some answers. Or do we? Muahahahaa. As suspected, some characters aren't who they seem, my loathing for a particular character shot up ten fold and I really rather wanted to throttle Lemony's boss.

All in all this book is driving us towards the finale, and I'm excited to finally have all the pieces of the puzzle and work out what's going on! 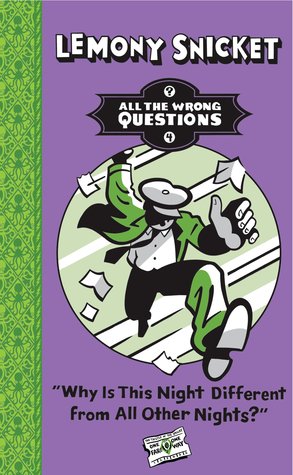 Why Is This Night Different From All The Other Nights?


Can Lemony Snicket finally discover all the right answers?


He was almost thirteen and he was wrong. He was wrong about all of it. He should have asked the question “Is it more beastly to be a murderer or to let one go free?” Instead, he asked the wrong question – four wrong questions, more or less. This is the account of the last…

Finally, the end is night. I'd love to say it ends all neatly wrapped up but I mean...that ending?! LEMONY WHERE ARE YOU GOING?! I was STILL left wondering! Or maybe the better phrasing is unsettled. I'm not sure. Anyway, all the questions we have are answered. We finally find out who Hangfire is and you're left guessing right up until the end! Although I was correct about a certain female character!

I kinda wanna know more about Lemony's sister and what happened to her it has to be said. It also has to be said that I'm hopping mad that Stew just....got away with it! Man his parents are pushovers. He really turned out to be a completely vile character. Honestly. Everything's wrapped up don't get me wrong, and I can't fault it. But emotionally it wasn't all that wrapped up, I think.

The noir is strong in this one as we all board a train, there's mysterious figures in disguise, a murder and a  hunt for the villain and the truth. I'm not sure if I'm the only one who got Murder on the Orient Express vibes, mostly because, ya know...murder on the train!

The thing about the mystery is that information has been withheld from us, fellow readers. Which makes it kind of impossible for us to beat Snicket. I was always wrong in my guesses and had no hope of beating Lemony, let alone when the huge reveal was based on information we didn't have! Everything fit, and the series has ended with most things all wrapped up, although not entirely neatly! But what do you expect from a Lemony Snicket book!

Email ThisBlogThis!Share to TwitterShare to FacebookShare to Pinterest
Labels: All The Wrong Questions, Kids, Lemony Snicket, review, Shouldn't You Be In School, When Did You See Her Last, Who Could That Be At This Hour, Why Is This Night Different From All Other Nights