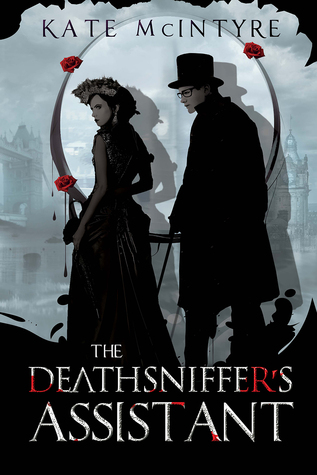 After losing his parents in the Floating Castle Incident, the sensitive and mannered Chris Buckley has spent six years raising his magically talented little sister, Rosemary. They have been living on the savings that his once-wealthy family left behind. That money is drying up, and Chris finds himself with no choice but to seek out work in Darrington City as it spirals into a depression. The only employer willing to consider his empty résumé is O. Faraday, the manic Deathsniffer. Faraday's special magical gift is a heightened intuition which is invaluable in hunting down murderers.When a Duchess calls on Olivia to solve the mystery of her dead husband, Chris finds himself tangled in Faraday’s daily life and unable to extract himself from the macabre questions of the investigation. His involvement grows more complicated as political forces close around Rosemary. They only see her as a tool that can be used to end the depression at the cost of her freedom—or even her life. Chris must juggle the question of who killed Viktor val Daren with the responsibility of keeping Rosemary and her magic safe from those who would use her up and toss her aside. Worst of all, he begins to learn that the national disaster that took his parents’ lives may not have been the accident it seemed.

So, the NetGalley backlog continues and this time we've got floating castles, an Edwardian setting with a twist, a lady detective, and a murder mystery twist. What's not to love about that? Or at least it should intrigue you!

Now, while I liked this book, it didn't quite reach the level of excitement for me when reading, where I'd be babbling on in a review for pages and pages, but nevertheless it was quite a good read.

The book is set in an alternative London and all things myth or paranormal are known of and are slaves to humans. They pretty much do everything. I enjoyed the magic system in this book, it was an interesting one and to me it was original as I haven't read anything like it before. People are categorised according to their abilities and there is a variety of them, and the book explains it all rather well, the main character, Chris, has a sister who has an incredibly rare ability and he has to look after her and so on and that's how he comes to be working for the deathsniffer.

The murder mystery was very well done, there where many suspects and I found it very difficult to work out who the culprit was so I was surprised at every twist and turn, while chuckling over Faraday and her outbursts.

The characters are difficult to talk about because they're each incredibly flawed and it's because of their flaws that I found them hard to like in the beginning to be honest. But then it's these flaws that eventually endeared them to me and made them some all the more realistic. Faraday, the deathsniffer, doesn't really care about others, and I have a lot of issues with people who aren't considerate to others so she got my back up once or twice until I started to like her. Although I did enjoy the fact she didn't care much for convention.

Chris was, in the beginning anyway, to me a whiny rich person, who was now poor and couldn't cope basically. He doesn't care for people and he's incredibly resentful. In contrast to Faraday he cares more about convention than anything else. Each character is broken, and as you read you watch them come together and start to change here and there in little ways and it was interesting to read. Especially as this is only the first book so they both have a ways to go in character development, and the two of them, I think, will change more and more over the other books.

If you're thinking Chris and Faraday are sounding familiar right about now, how they're opposites and so on, then you would be correct. I found the relationship between the two to be very similar to Sherlock Holmes and John Watson. Just saying.

There were a couple of little things that prevented me from giving this a higher rating, despite the fact I was intrigued in the beginning, I couldn't get on with the characters until a little later in the book so it was hard to keep reading at the start, I only carried on because I was so intrigued. There were a few spelling and grammar mistakes, but I had an arc so I would imagine these would be fixed. There's a time jump in the beginning between the two first chapters that was incredibly jarring and mildly confusing as it switched POVs as well. We basically time jump 5 years from Chapter one to Chapter two and it's not mentioned anywhere that it's 5 years later so for the first few pages of the second chapter you're unbelievably confused at the new POV and everything.

It too me a while to get used to the terminology used in the book as well. Like at least half of the book. It was much the same with the politics and the creatures of the world, I was confused for a good while at the beginning as I was trying to put it all together and build the world in my mind. I think the world building could definitely use some work as I felt incredibly confused, as if I'd missed something like missed a chapter entirely full of background, or had missed a first book or something similar.

That said, I did find the book charmingly original, and once I got to grips with it I enjoyed it immensely, so I'll be intrigued to see what happens in the second book.