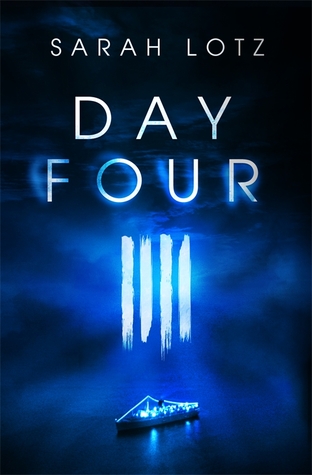 Four days into a five day singles cruise on the Gulf of Mexico, the ageing ship Beautiful Dreamer stops dead in the water. With no electricity and no cellular signals, the passengers and crew have no way to call for help. But everyone is certain that rescue teams will come looking for them soon. All they have to do is wait.That is, until the toilets stop working and the food begins to run out. When the body of a woman is discovered in her cabin the passengers start to panic. There's a murderer on board the Beautiful Dreamer... and maybe something worse.

Okay I used the GoodReads synopsis because I didn't want to give away too much information if I did my own synopsis, but man this was the best possible sequel to The Three. So creepy. So, so creepy.

This isn't a proper sequel, it's a standalone book with a few little connections to The Three.....anyone remember the Small's? Yep. I thought it was very well done, kind of making it a sequel, but not really but with some mentions of events from The Three that made you flail a bit because you recognised them and then go all "aaaahhh", and you realise it's all set in the same world.

This is one of those books you might want to read in broad daylight, because while in the beginning it was all good, you know, introducing everyone....and then the ship stops. It was all still fine, someone was murdered, I still wasn't creeped out. I got creeped out when the passengers started seeing....things. Ghosts....possibly. That's what tripped my freak out switch. I'm all good with horror films unless it's to do with ghosts, i didn't sleep properly for weeks after watching Paranormal Activity, and that film wasn't even that good.

Then the whole thing with Celine, she's a fake showbiz medium, but after the ship shuts off, she went full creepy. Like possessed or something, and she made my skin crawl more than once. I was glued to the page with intrigue just as much as horror/terror/creeped out-ness, it was like an accident..you wanted to look away...but you couldn't bring yourself to. I was like 'okay, i'll give it a rest...but.....wait...'.

We get multiple views again, which where done very well, everyone saw different things and had different experiences, and some where creepier than others. The view switches where well done, and added a nice creep factor considering one of them was a murderer, and then Xavier added the kind of rational take on everything that made you think about what was really going on instead of just blindly believing everything the other view points said, I had points where I was like "okay he's totally right" but then I'd read another POV and I'd be like 'okay...maybe he's not...because that doesn't even seem plausible and something really weird is going on here'. My opinion changed as I kept reading the different view points, until I was just plain shuddering creeped out and was like okay none of this is okay, something freaky is going on.

The entire book is set on the ship, and at one point with the lifeboats it reminded me of Titanic, and then at the end it reminded me of the Mary Celeste, and the book actually mentions three cases of ghost ships that I will be googling, because I find it oddly fascinating that so many people can disappear with no explanation, and I find it fascinating right up until I get all annoyed that it's a mystery and there is no answer. This goes some way to offer some sort of explanation as to what actually could have happened to these ships, much like what happened on this one. I think the book being all set on the ship helped to add to the atmosphere as you where reading, it gave a certain sense of claustrophobia, that the passengers must have been feeling, and the atmosphere of the book certainly started to get to you at one point, your really felt the atmosphere.

The tension grew and you could feel it. Four days with no rescue in this day and age is certainly odd, and what they saw when they got to land was certainly something that made you think, as well as truly freaking you out. I won't be going on a cruise anytime soon. You got the sense of isolation very well, they'd been off on this cruise, floating at sea for days with no rescue, and they had no idea what was going on on land, what's stopping rescue and what they where going back to. It's not hard to start picturing the worst like the characters where.

Lotz makes everything seem so real with her descriptions and vivid world building, you feel like you're there on the ship when you're really lying in bed or sitting in your favourite chair or whatever. The book is just so gripping you need to be able to read it in one sitting to be honest.

What I loved most was the last chapter. You end the characters view points with the engines starting to roll, and you're thinking "what!? That's it?! Whaaaaatt" and then you turn the page...and then the freakiness reaches a new level. The entire last chapter was made up of newspaper articles, blog posts, (speaking of blog posts, Xaviers where a nice little creepy touch as well as rather ominous and helped to break up the narrative to keep it fresh) and at the very end the worlds creepiest interview transcripts, leaked interview transcripts. You see when everyone was told there where no survivors....there where actually five.

I LOVED this mixed media approach in The Three and I loved it even more in Day Four, it seemed like the perfect ending for the book, allowing you to draw your own conclusions about what happened and your own opinion as you read what each person says happened. I loved how you got little bits and pieces about what happened after the ship started moving again, and you're left to decide who you believe. You can decide what happened, who's telling the truth and what really happened to the others, and I just think it's a truly brilliant ending. Normally I'd find this sort of ending annoying, because I hate unsolved mysteries, they really vex me unless there's some sort of answer that's believable, I don't know why, they just do, but it really works for Day Four and I can't imagine the book having any other ending. Especially as, for me, it added some more creepiness.

Day Four is brilliantly written with an astounding ending and it gives you chills the entire way through, leaving you feeling nice and creeped out and with no particular need to go on a cruise oh..say...EVER.