Conspiracy of Blood and Smoke 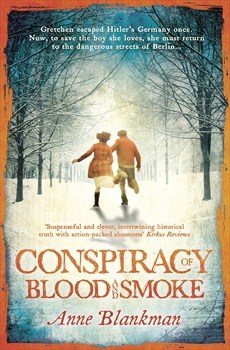 Conspiracy of Blood and Smoke
Rating: 5/5
Buy or Borrow: Buy
Source: Copy courtesy of the publisher and Bookbridgr!
Check out my review of the first book...here!

The girl known as Gretchen Whitestone has a secret: she used to be part of Adolf Hitler's inner circle. More than a year ago, she made an enemy of her old family friend and fled Munich to live in Oxford, posing as an ordinary German immigrant. Her love, Daniel Cohen, is a reporter in town, and Gretchen is content. Then a telegram about a family member sends Daniel back to Germany, and her world turns upside-down when she learns that Daniel is wanted for murder. To save him, she must return to her homeland and somehow avoid capture and recognition by her former friends, the Nazi elite. And as she and Daniel work to clear his name, they discover a deadly conspiracy stretching from the slums of Berlin to the Reichstag itself. Can they dig up the explosive truth and escape in time - or will Hitler discover them first?

So, I really enjoyed the first book, history geek that I am, and the angle it took, and I was super excited for this sequel, and honestly it was as good as I was expecting! There was the whole murder whodunnit bit that I wasn't expecting that was intriguing and kept you busy trying to work out who'd done it and why!

I enjoyed the continued romance of Gretchen and Daniel, the relationship continued to feel natural and organic, and the development of their relationship was something, again, very natural and realistic, especially with all the obstacles they had to face and what they had to deal with. I will admit, my heart stopped when it got to the part about Daniel being executed and I was like...no, you can't....whaaat. It was a very real fear, and to be honest, I was reading and waiting for something to happen because I wasn't sure they'd be lucky enough to get out of Germany twice!

I enjoyed all the historical aspects, I absorbed it all like a sponge and was trying to work out what was true and what was not, as much as we'd studied World War 2, I don't recall the fire mentioned in this book, so I was fascinated and eager to find out what happened. Luckily, the author once again has extensive yet concise notes on the historical facts of the book. Blackman's notes are literally there to answer every question you have, yes this is real, this is what really happened and so on, and you come away from the book having learned something, or having had something clarified.

I'm fairly confident in saying this book is very historically accurate, excluding the made up characters of course! Not only do the authors notes prove the author knows a considerable amount of the history, but throughout the book she's clearly sharing her knowledge with every reader. Things I remember from learning about the pre-war atmosphere and things I didn't know mesh together to give me a better picture of the politics and the way of life at the time and what it was like to live in Germany when Hitler was coming to power and War was looming. My point is, the author has considerable knowledge, and things I know for sure are historically accurate are in the book, and so, I'm willing to say this book is very historically accurate.

The author continues to transport you to Germany of the past, giving you an insight in to how Hitler came to power, why, how he achieved it, what went on in the years before the war, and what it would have been like to live in Germany at the time, and it's pretty scary to picture yourself living there during these times. The book is utterly fascinating to be honest.

The plot was intriguing, not just because it's history and you want to know more because you didn't know this or that, but because the writing is so compelling, you want to know who killed the girl and why, you want to know what's going to happen to Gretchen and Daniel and you're on the edge of your seat as you're reading, hoping they're going to be okay and make it out alive, but there are some pretty close calls that have you holding your breath and frantically turning pages. You're so invested in these characters that you have to continue reading to make sure they're okay. There's plenty of plot twists and turns to keep you engaged in the story, and have you gasping in horror or shock, it's very hard to put the book down and I read it in one sitting.

In short, this book is the perfect sequel, the perfect continuation, all the things I loved from the first book where present in this book, and I loved feeling my brain expand as I learned more from this book, much like I did with the first book. I'm hopeful that there might be a third book and we'll see our pal Winston again, perhaps?
Posted by Alisha at 10:00

Email ThisBlogThis!Share to TwitterShare to FacebookShare to Pinterest
Labels: Anne Blankman, Conspiracy of Blood and Smoke, Historical, Prisoner Of Night And Fog, Teen, ww2, YA