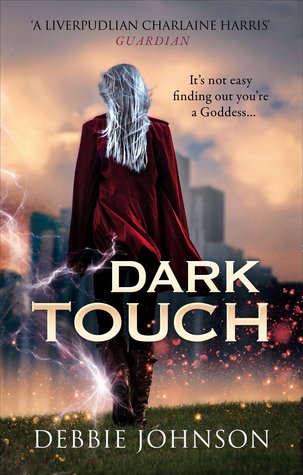 For Lily McCain, the move from local music journalist to being the incarnation of Mabe, Mother of Mortals was a surprise to say the least....and a surprise she fought at every turn. Now she has chosen Gabriel as her mate, she has to face down the council. You know....polite introductions with other...unusual individuals, which means a trip to New York, where they find one of Gabriel's people needing help with a problem.

It's Lily's secret investigations in to said problem that causes a world of trouble. You see the problem has been stealing people's souls and collecting them like stamps or some such collectible item. Lily is thrown in to a game of gods and monsters, the rules of which she barely knows, and one thing is clear: if you have power, someone will try to take it away from you. Someone who wants to use it to evolve like a Pokemon in to something bigger and badder and infinitely badder for the world. Lily will have to make the ultimate sacrifice, trust a frenemy or allienemy? Anyway, she's gonna have to do all that and pretty much cross her fingers and hope for the best....


Okay guys, so (why do I ALWAYS start reviews with that?!) I won this in a Twitter competition from the publisher and I didn't really have to review this especially as it's been out for over a month now, but I kinda felt like I should because I think a fair few of you guys are going to like this, and it's a book that needs to be shared.

I think this may be a new favourite series of mine, and I'm eagerly awaiting the third book. Yes. I am assuming there is a third book because positive thinking gets you everywhere. I'm going to try not to do my usual gushing and rambling but it's going to be hard!

I've got to say, this book is SO FREAKING BRITISH (Grand Poohbah *cackles*). Like not just where it's set, but just in the humour and the language and the phrases and everything and it's so perfect because of that, it's pitched perfectly and I can't even really. I rarely read books set in England, let alone ones as damn good as this and I have never before had the urge to go to Liverpool, but now I quite want to day trip it up there and have a look around at Lily's world!

"Everyone else was either trying to turn in to the Invisible Man or, in the case of Carmel, sitting back to enjoy her own personal episode of the Jeremy Kyle Show."


For those of us who haven't been to Liverpool (what a setting though!) the city is brought to life effortlessly by the author, and the world building is such that it will suck you in until a bomb could go off in the real world and you'd have no clue. In this instalment New York is also brought to bustling life, and I LOVED the Friends reference! Anywho, as someone who already is desperate to go to New York, this book didn't help curb the urge. Whatever setting the author decides to throw us, it's created to be vivid, atmospheric and engaging, and will have you absorbed in the book in minutes.

I love the rich mythology to the book, it's not something I'm familiar with and I enjoyed learning about it in the first book and continuing to learn about it in this book. I love rich mythology like I love an Five Guys...deeply and to disturbing levels. The author gives you lots of knowledge, without sacrificing pacing or the plot, it's concise and it builds up over the books.

The characters. Oh how I LOVE the characters. Never before have I come across a more colourful cast of characters. The Morrigan....a load of bawdy Irish blokes who love killing things and then getting drunk....vampires....a proper Scouse girl.....a goddess......various other people of varying natures. Each character is just so lively they leap off the page and in to existence. Each brings something different to the story, each the story couldn't do without and each is so well written and brought to life and so full of depth it's amazing the pages can contain them.

"Public speaking isn't easy at the best of times, and he was getting heckled by two goddesses, a love rival vampire and a very seasick Egyptian Warrior Woman. Life at the top eh?"


I love Lily. I really do. I connected with her instantly and ever since the first book, whatever happens, I am always on her side. I understand her as a person so completely, and how everything shaped her and how she feels things and why, she's a character I really get, and can root for. In this book, you see her grow and change and start to become the person she's meant to be. She's not perfect, and that's one of the things that makes her so refreshing, she has flaws, she's fucked up and she's up front about it and that makes her SO relatable it's insane. I mean....going for a pint when things get shitty...what other heroine does that?!

Carmel is a favourite of mine. I can't wait to find out about her heritage and what it means and who she really is and all of this. I love her friendship with Lily, it reminds me of me and my best friend, and they crack me up both together and separately. Not to say I don't love the other characters I do, I love them all, but I do have favourites! Oh and I love the Morrigan, can we have more of her please? She has been known to make me chuckle as well as make me fear her haha.

The plot was simple, yet complex, you could see where it was going...but there where surprises all over the place. It started out simple...then got complicated as we carried on reading, I mean I thought the problem was going to be the council, and then things happened and then there was a game changer right at the end. The book is an easy read, but there's a lot going on and the book gives you some intense feels, while making you snort laugh in public places.

"I shoved the guy with the toe of my boot, hoping he wouldn't do a backflip upright and produce a taser from his arse"


The romance. Now. Here's where I may have a slight issue. Just a slight one. Not enough for me to dislike the book, but one that makes me sigh a bit. Lily and Gabriel, destined to mate. Luca cute little vampire who's just adorable even though he's a vampire and can and will kill you. Lily and Gabriel have been a slow budding romance, although at one point it was suddenly all "I love you" and I was a bit like...oooohkay. Now, don't get me wrong, I find them cute. I do. It's kind of warm and fuzzy inducing to be honest. What's the problem? I hear you say? Well....

I know there's visions of what could happen and the end made me sigh and resist the urge to scream "no" even while I was like "aw" because, much like Lily, half the time I dislike Gabriel. She even says at one point that they will never be equal or words to similar effect. He says no more secrets, he keeps a huge one from her. He never trusts her to take care of herself and he's constantly seemingly having no respect for her and treating her like a child, with no care for her feelings in a  lot of matters. That is what annoys me hugely, and then when he is sweet, he screws it up by being a dick. Of all the things he's done to her, I'm still surprised she's forgiven him to be honest.

"At least do him the courtesy of listening, your Royal Bollocks. And if you can't be arsed, then off you fuck"


Now Luca. I love Luca, like I've said, I want to know more about Luca and I'm hoping I'll get that in book 3. I feel like Lily should give Luca a chance. I mean...he genuinely cried when he found out about her and Gabriel he was that upset. He treats her like an equal. This is going to seem stupid, but when they where all in danger at the end, Luca was the only one of the two who thought to save Lily's dog and keep it safe for her, knowing how much she loves that dog. Gabriel is overprotective to the point of being a total asshole half the time. I'm not entirely sure I understand her decision to go with Gabriel all the time. But I kinda wish she'd go with Luca. Maybe she will, maybe she won't in book 3, but I wish she had in this book.

Either way there's plenty of romance type things going on, some warm and fuzzies, and you pretty much feel exactly as Lily does, including when she feels monumentally frustrated. I'm just Team Luca and not necessarily riding the Gabriel train to be honest, maybe I'll come around. Either way it's not a big enough thing to make me hate the books or not read. It doesn't take away enjoyment, it just makes me go "noooooooooooo" a lot haha.


Dark Touch is a hell of a wild ride. It really is. Insanely wonderful characters, easy to read but with plenty of plot twists, action, romance, magic and mythology, Dark Touch is a hell of a hard book to put down and it's impossible to not enjoy it. Dark Touch is freaking hilarious. Like 75% (maybe higher) of the time I'm laughing at a comment made by a character, or Lily's narrative which is so ridiculously engaging and humorous. Lily and Carmels comments in particular crack me up, it's not a book to read in public because I was snort laughing at one point. Just a warning. The other 25% of the time shit gets real and it's all serious, and there's action and fighting and gore, and when none of the above is present? Cheese. This book is cheesy sometimes. Like eye rolling cheesy. But it's the RIGHT kind of cheesy, the kind that you need to curl up with when you've had a shitty day especially...but will brighten up any day.

Dark Touch is a hilarious, unique, original, laugh out loud, cheesy, action packed, wild ride, and when it gets serious...it usually makes you feel some intense feels. It pretty much has everything you want in a good book, and I'm excited to see where the story goes next.