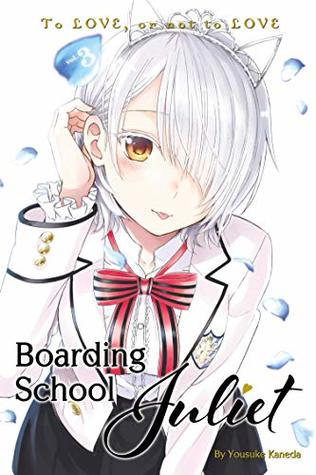 After Persia is saboaged by the scheming Aby, Inuzuka is desperate to help her recover her reputation--but one wrong move and he'll ruin his own. Then, once the sports festival is over, a series of mishaps brings Inuzuka to the attention of the prefects, the school's most powerful students!

As you can imagine from the synopsis we have the conclusion of the sports festival arc in this volume and holy shhhhhhh, Inuzuka and Maru actually team up and work together?! I've been so ready for them to take Aby down, to be honest, and while Inuzuka does get his badass moment...he also loses his position as leader of the Black Doggies. Although I'm still unsure how he even got the job in the first place!

As for Persia, we've already seen her feelings develop a lot and the fact that she wanted to be MVP to dance with Inuzuka shows that even more, not to mention the chapter following it when she looks after him. I'm liking getting to see her feelings grow and develop more, and it's been very clear throughout the volumes and well done.

Interestingly, we get to take a look at the hierarchy of the Black Doggies as we meet a couple of the Prefects, Teria and Kocho. They also make an interesting point that could be a hint for the direction the story is going to go in. I have to say, it's a nice chance for us to see another side to Romio, along with Persia too! Although they did irritate me by digging through his stuff but plot progression so I'll let it slide.

I also need to mention the fact that after getting to spend some more time with Char in this volume...I'm actually coming to really like her! As well as watching her and Romio come to an understanding. I am pleased they're not taking it in a romantic direction with the two of them though, because at one point I did have that fear.

While there's plenty of fun in this volume, it also gave me a huge sense of foreboding because ever since meeting the Prefects...I had the horrible feeling Persia and Romio where going to get found out and then it turns out that Romio's older brother is the Head Prefect of the Black Doggies. it was quite the shock reveal...along with serving to deepen my sense of foreboding because it was pretty obvious they aren't close.

Honestly, Romio's brother is a bit of an a-hole. When we got to see the relationship between them and the flashbacks I was like woah. Like....he's evil. Romio's brother appears to be the next big obstacle he and Persia will have to overcome in the next volume and it's possible he might get some evidence and reveal Romio and Persia...he does already have his suspicions. At this point I am kind of hoping the manga will go in the direction the Prefects hinted at...especially as I feel like Romio is going to have to do some growing up to get there.

Volume 3 has a light and humorous start to the volume that then progresses and gets more serious as it does so, as Romio and Persia are facing their biggest obstacle yet.
Posted by Alisha at 10:00