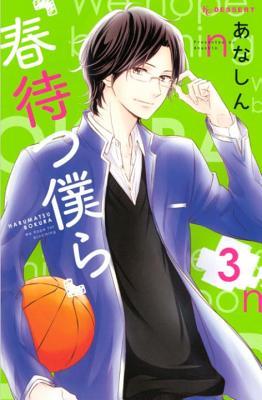 Mizuki is a shy girl who's about to enter high school, and vows to open herself up to new friendships. Of course, the four stars of the boys' basketball team weren't exactly the friends she had in mind! Yet, when they drop by the cafe where she works, the five quickly hit it off. Soon she's been accidentally thrust into the spotlight, targeted by jealous girls. And will she expand her mission to include... love?

Things are hotting up in the romance department! Kyosuke confronts Mitsuki about she and Aya after spotting them, like not really confronts but more like teases her a little bit! Although he does fully throw her under the bus later in the volume like the brilliant friend he is! I can't quite figure Towa out, but he does appear to be quite jealous, and he's definitely making his move....finally! Aya is kind of bugging me, possibly because I don't ship he and Mitsuki and I'm like 'yes okay...go away now!'.

Mitsuki makes another friend this volume in Maki! Although she doesn't seem to realise that Maki is a love rival for her! Maki seems nice enough to be fair, and she and Mitsuki are quite fun together! They plan to do their best and keep trying which was sweet. I'm wondering how much of a misunderstanding she's going to cause and how much it's going to screw everything up though!

Reina continues to be completely hilarious to me. Bless her. I wish I had the money for a camera lens like hers, I'm not going to lie. That's some heavy duty telescopic stuff right there! But she's exactly the kind of friend Mitsuki needs and she's helping her to be better and I live for their friendship!

Ryuji bless him, tries to thank Mitsuki in his own gruff way which was kind of hilarious and I really need more of him and the two of them interacting! I love how all the boys act like her squad and are kind of like annoying older brothers at points, it's sweet!

There's some cute and fluffy scenes between Mitsuki and Towa and it seems like we might be getting somewhere with this romance fiiinally! Like there's definitely developments but there's a misunderstanding possibly about to cause a snag, and then there's Aya. Aya is the ever present thorn in my ships side. Or should I say iceberg? Either way, there's incoming drama to offset the sweetness of the story!

The volume once again leaves me wanting more, I've yet to be disappointed by a volume. We get some basketball games in this volume, and they're drawn brilliantly! The volume and story in general are moving at a nice pace too, and there's always something happening. This is such a lighthearted, sweet series!