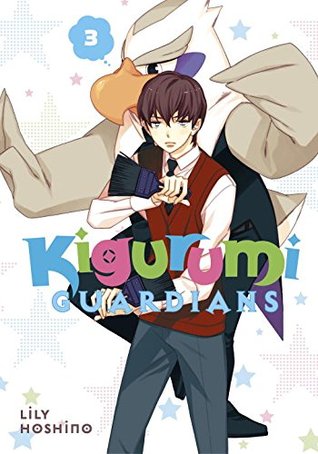 Hakka's second year of middle school was dull as it could be, until a suspicious cow mascot ("kigurumi") shows up in her room, holding a sign that reads, "My Name Is Ginger." But this isn't (just?) a stalker, it's a magical being that's come to convince Hakka (and her friends) to become Guardians, and save the world! Hakka is understandably confused, until she's suddenly attacked, and a beautiful young man leaps in to save her. Can this handsome knight and the weird kigurumi be... one and the same?

The volume opens straight up with action as the choral competition begins and is soon gate crashed by the bad guys. Comfrey shows up with Lavender and he's actually kind of hilarious for a bad guy and I'm actually hoping to see more of him in future volumes! He could be a fun opponent for the gang!

It's nice to see our trio have bonded and are acting like a team...and friends as they all hang out with Nobara in an effort to make her feel better. It's heartwarming and entertaining at the same time, thanks to all the banter and interactions. This volume shows how close they've become and how well they know each other and I love the friendship between all of them so much!

There's a lot of focus on Nobara as the volume opens up, and Basilico gets a chance to let loose and go full badass. It's the most serious I've seen him so far and it's such a contrast to his usual personality!

Chigaya hints at something to do with Hakka, something Ginger is keeping a secret and I'm trying to work out what it is, but I genuinely have no clue. It's a little thread of mystery running through the plot and then the reveal at the end left me shook!

In actual fact it seems Ginger, Basilico and Fennel are all keeping something from Hakka, Nobara and Satsuki. So there's plenty more mysteries to be untangled in the upcoming volumes and I'm intrigued to see what bearing it'll have on the plot!

We get a glimpse of Satsuki's home life which provided some interesting insight in to his character, as well as showing us some of the relationship he has with Fennel...and more of Fennel in general. He's been the most mysterious so far of the three and I actually felt quite sad for the poor guy. I could really empathise with him and see where he was coming from. His life and character in general just really broke my heart this volume.

The volume starts with action and ends with action as our characters (except for Nobara and Basilico) are in a dire situation, and then we get left on an epic cliffhanger like...is that Hakka?! What happened?! I can't even right now!
SaveSave
Posted by Alisha at 10:00