Hey guys!
A brand new anime season is starting, duh, because it's Fall and everything! So I thought I'd share with you guys all the anime I'm going to be watching for the upcoming season! Most of them I'm going to be watching dubbed but there are some subs in there too...and to be honest, if I end up really loving a series I'll be doing what I usually do and watching the sub and dub because I'm impatient...anywaaaayyy! Most of these are starting this week or next week, the dubs are starting later as far as I'm aware! But there aren't any dates yet for the dubs so I'll edit this and update when I know! I'll give you the sub start dates though! Asta and Yuno are two orphans who want the same thing: to become the Wizard King. Locked in a friendly rivalry, they work hard towards their goal. While Yuno excels at magic, Asta has a problem uncommon in this world: he has no powers! But, on the day they receive their grimoires, they surprise everyone. To reach their goal, they’ll each find their own path to greatness—with or without magic.
Okay so, I was eyeing up the manga version of this a few months ago and couldn't decide if it was my thing, so I figured I'd give the anime a go! It's from the same studio as Naruto, and I've seen one review of episode one saying it's kinda like Naruto so fans of the show might want to check this one out!
Sub: Airing Now!
Dub: TBA

Cardia has spent her life locked away in solitude, hidden away from others due to a deadly poison residing inside her. But one day everything changes when the royal guards suddenly abduct her! Before she can despair, she’s rescued and swept away by Arsène Lupin, a dashing and chivalrous thief. Together, they travel to London to find her father and answers about her mysterious condition.

I'm envisioning some Artful Dodger type character with Arsène and some romance...plus it's set in London so you know...have to watch something set in my hometown! I'm also liking the look of the art for it!

At the end of World War II, sorcerers use the lives lost in battle as a sacrifice to conduct a ritual. If successful, the ritual would resurrect a group of supermen whose coming would signify the world’s end. The war ends, and no one knows whether the ritual was a success. Decades pass, and it’s all forgotten until present-day Japan when Ren Fuji has a disturbing dream of black-clothed knights.

I'm a bit of a history nerd so as soon as I saw "World War II" I was like yep...I'm watching you! It sounds like an interesting premise and I'm really expecting good things from it!

For one wish, they’ll risk it all. The time has come for the Twelve Tournament—held every twelve years. For twelve proud warriors, each baring a name from the Chinese Zodiac, they’ll prepare to fight in a bloody battle royal. The victor gets any one wish they desire, but they’ll have to do whatever it takes to earn it. Blood and tears will flow on this battlefield—who will be the lone survivor?

I mean....I'm basically going to be watching this because I think it sounds awesome, and I haven't watched a solely fighting anime in forever. 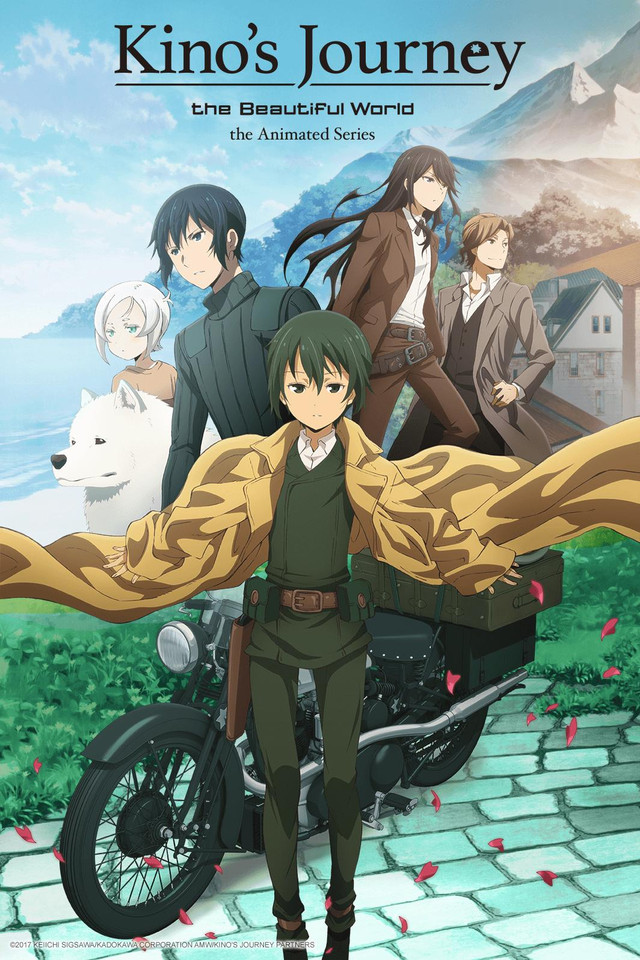 In an imperfect world, the stories make it beautiful. Meet Kino, a traveler exploring beyond her boundaries into unknown mystical places! With only her guns and talking motorcycle Hermes by her side, she learns about unique people and their customs through the fascinating stories they weave. But to see everything, she can only spare three days to each land before moving on to the next adventure.

I'm not going to lie...I pretty much added this to my list because I liked the look of the art and I was like "ooohh stories!" Yep. I have some seriously deep reasons for adding anime to my list haha!

The award-winning manga comes to life with a highly anticipated anime series! Suffering a tragic childhood and sold at an auction, Chise Hatori has little hope for a better life. But when a mysterious sorcerer named Elias takes interest in her aptitude for magic, he decides to make her his apprentice—and his bride.
I've been eyeing up the manga for ages, but I feel like I'm too far behind to catch up with it so I'm super excited to get stuck in to the anime and see what I've been missing!
Sub: Airing Now!
Dub: 30th October! 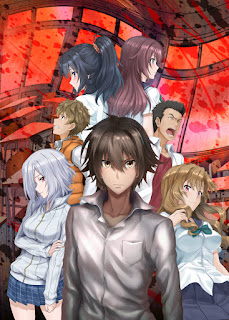 One night, all 32 members of a high school class receive a text message on their cell phone. It welcomes them to a game where they are given specific tasks to carry out in a 24-hour period. The tasks seem simple at first, but soon the tasks go beyond what the kids are comfortable with. Furthermore, they learn that the cost of failure is death. Will they be able to find a way out before more die?

Okay so, this kind of gives me Classroom of the Elite vibes but darker, so I'm interested to see where this goes. It could be what I was expecting from CotE which would make me veeerrryy happy! 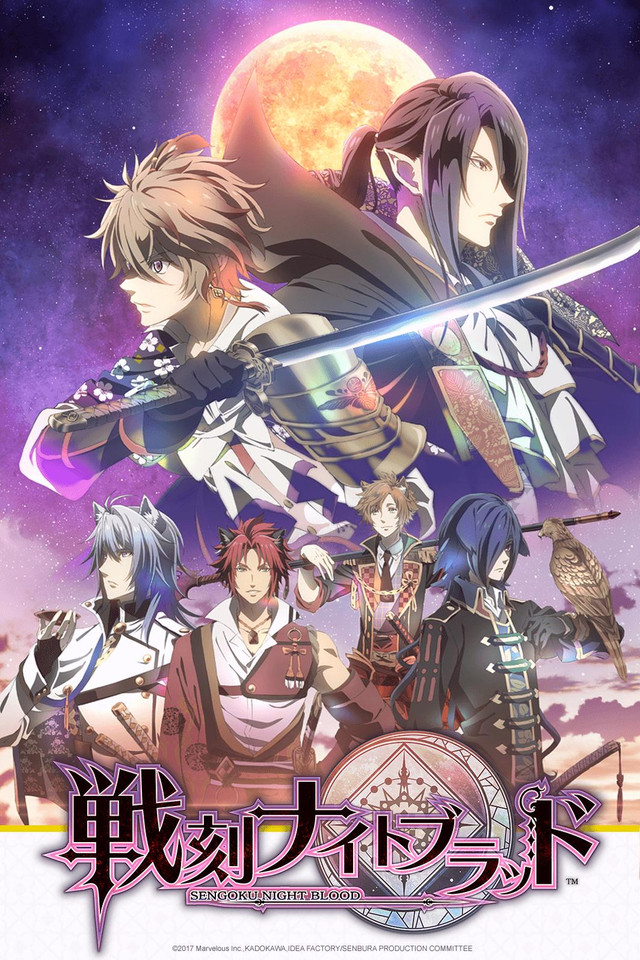 One day, Yuzuki is enveloped by a mysterious light suddenly emanating from her cell phone and finds herself in an unfamiliar place. The scenery spread out before her almost resembles Sengoku period Japan..but this is another world known as "Shinga" where non-human creatures such as vampires and werewolves reside. Long ago, the various tribes of Shinga lived together peacefully under the protection of the Himemiko who possessed special blood. However, one day the Himemiko suddenly vanished. With the protection of the Himemiko gone, the world has fallen in to a period of strife.

Pretty art and pretty characters are my deep and meaningful reason to watch this anime! I just fancied adding something that had the potential to be fun, and have a little bit of romance possibly. Although I've actually seen a reviewer saying this is like the anime version of Twilight and I hate Twilight so this should be interesting.

Yushi Inaba is forced into an awkward living situation at his uncle's house after his parents pass away. He decides that when he goes to high school, he's going to live on his own, and finds an ultra-cheap apartment named Kotobuki-so. But it was a monster apartment, filled with monsters, humans, and ghosts! At first, Yuki doesn't know how to deal with these eerie monsters, but after spending time with these strange creatures his closed heart gradually begins to open...

I loved the first cour of this, it was enjoyable and a lot of fun, and it took some twists and turns I hadn't been expecting! So I was super stoked to find out it was getting a second cour yaaaaay! I'm expecting good things from this second cour, like exploring Inaba's powers more!

Recovery of an MMO Junkie (Crunchyroll/Funimation) 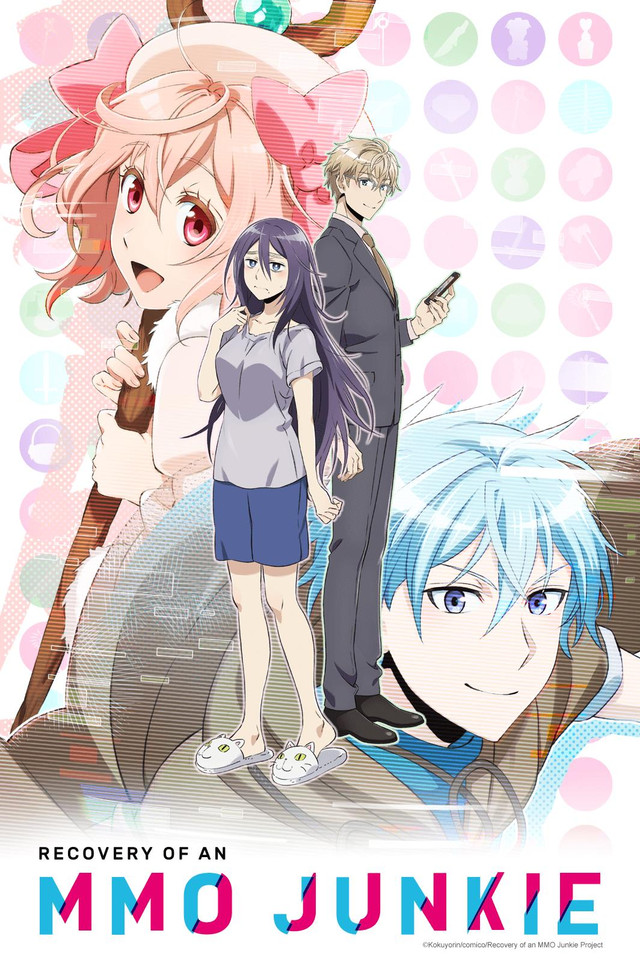 Morioka Moriko is 30, single, and a NEET. She has dropped out of the real world. Searching for a safe place, the place she ended up... is the online world!! In this online game, Moriko starts a new life as a handsome young man with silky hair named Hayashi. However, she’s an obvious noob and ends up dying numerous times when a lovely girl named “Lily” lends her a helping hand. Meanwhile IRL, she ends up having a shocking encounter with a mysterious handsome salaryman named Sakurai Yuta. After meeting him, the real world starts to change and starts affecting her online world as well?!

I kinda debated whether or not I wanted to watch this but I've decided that this is probably going to be entertaining and funny so I'll give it a shot! I always give a show five episodes to impress me before I give up so we'll see what happens!