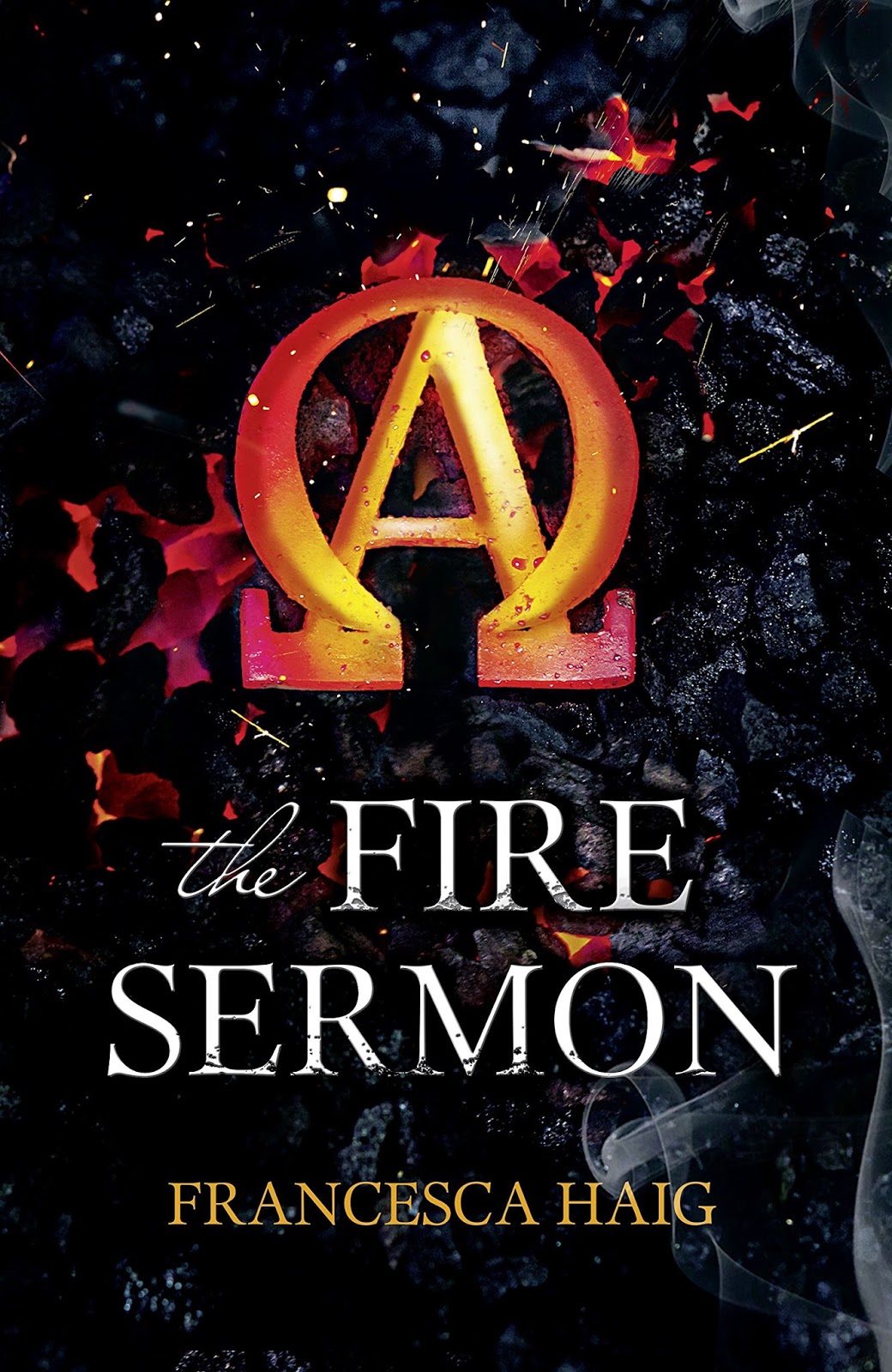 Four hundred years in the future, the Earth has been greatly damaged by a nuclear fire, now, humanity lives in a world that's reminiscent of the middle ages, and is very primitive. All technology from the Before, like Electricity, is taboo, not to be used or touched. Most of the animals and the humans died at the time of the fire, and for generations after, babies where born not quite right thanks to the radiation. While it's been many years and the radiation is gone, every person is born with a twin. Each pair of twins is one boy and one girl, one Omega and one Alpha. Alpha's are perfect in every way, whereas Omega's are all born with a deformity of some sort, missing limbs, and so on. Omega's are branded and sent away to live in Omega settlements when they're very young, they're not welcome in Alpha society and are thought of as lesser, as if they're contagious.

The Council are in charge, and they rule over all the Alpha's and Omega's. The Alpha's get everything, the best land, the best resources and so on, and the Omega's get nothing, barely enough to survive on. Alpha's may think they're superior, but there is one catch, one minor detail that means the Alpha's are never quite as free as they'd like to be....if one twin dies....so does the other. Without fail. One feels the pain of the other, the sickness of the other, and there is no way around it. Some high up Alpha's even keep their Omega's in a prison of sorts called the Keeping Rooms. Omega's live in ever worsening conditions, but there is one hope, an Island, an Island for Omega's where they can escape and live in peace, any talk of said Island results in a harsh punishment. Unfortunately it's not real. Or is it?

Things are about to change....

Cass is a very rare Omega, she has no deformity that can be seen, hers is hidden, you see, she's a Seer. As a child she learnt not to cry out when woken in the night by her terrible visions of the past and predictions of the future, a skill that allowed her to start with her parents much longer than usual, but causing a fair bit of resentment from her twin, as their parents tried to work out which was Alpha and which wasn't worth their time. Now her twin, Zach, has gained an awful lot of power on the council, including the new name The Reformer, and when Cass is dragged from her settlement to be locked in the Keeping Rooms, she stumbles across something terrifying in her bid for freedom.

On the run from her brother and the Council, she still wants to believe in equality between the two, and envisioning a world where Alpha's live side by side with Omega's is one reason they're after her. The other? Like I said...Cass is a Seer, not only would she be useful to the Council, but she's started to have some rather interesting visions....visions of an Island of Omega's, an Island that isn't supposed to exist, that's supposed to be a myth, and the Council will do anything to find it and shut it down. But they're not quite expecting the resistance they will meet. Omega's have more power than they realize.

So this book was totally incredible! I'm not really getting the "it's like the Hunger Games" vibe going on, because it's nothing like the Hunger Games, it's in fact, totally different, and that's why I loved it! Because of filming and other commitments, this took me a few days to read, rather than the few hours it should have if I'd been able to sit and read it in one go. Now I'm slightly glad about that because I got to enjoy the book for longer, but at the same time it was SO hard to put down and there was a definite lack of sleep because every time I was like "okay, this is the last chapter" something would happen and I'd be like "....one more! It's only.......2am...uuumm...." but who cares?! I was incredibly bereft when this was over, and I seriously didn't know what to do with myself.

I've been incredibly lucky lately, and I feel so incredibly grateful because a few publishers have sent me some truly incredible books that have everything I love in them and I have found myself with a whole host of new series to love and agonizingly await the next books of, and Fire Sermon is one of them!

I have such a thing about unique books, and you all know it because I always mention it, I should probably start a tag to be honest! But this is another for my list. It's so incredibly unique, it's a breath of fresh air to the genre that's full of wannabe's right now, and books trying to be something else. Fire Sermon has a thought out and complex background, history and politics to it, and it's all explained, and told to you with so much detail so you fully understand everything that's going on, why it's going on and so on, but without dragging the pace and narrative down. Cass's background in particular was inserted incredibly well in to the narrative, so you know time is passing as she's in the Keeping Rooms, but she's flooding you with memories as to how she got to this place, and each time in between the memories you're waiting for the next installment!

The Fire Sermon gripped me from the beginning, I was fascinated and immediately wanted to know more about the world, and Cass and just what was going on. From then on, it was a real struggle to put down so to be honest I'd recommend clearing your schedule so you don't have to! The world building in particular was so vivid, and I loved it because it sucked you straight in to the world, and you feel like you've visited the world and you have such a clear image, not to mention the atmosphere created, it's intense at times, to say the least, but you can feel the atmosphere, and practically see it oozing off the page, and it totally engulfs you. You really do feel a range of emotions, not only from the atmosphere, but from the events and the characters and so on.

I connected with Cass so easily. So, so easily. I really came to hate Zach, and I seriously wanted to smack him one, but then like Cass, I also felt for him at times as well, and I found myself being conflicted once or twice, but still usually hating him. It's so tricky. He's a villain, he's doing all the horrible things to the Omega's and he does have his reasons, and he seems quite evil at times, but then you can see his point of view, and then he does something like he did at the end and you're like....okay...maybe you're not THAT bad. But then it's like no actually you are. And it's reaaaally hard! You can get why he's like he is, and you can even get why the Confessor is like she is, although I'm still curious as to how and why they ended up working together, I'd have thought Zach would have nothing to do with another Seer, I think it's more than the ambition they both have to be honest. But maybe I'm reading too much in to it!

The plot is complex, there's all the political things going on with Zach and what he's doing and why, and what his ultimate plan is and the electricity and what's really going on under the surface, and then there's Cass on the run and her journey to get to the Island and everything that entails, and then coming back and everything after. It's all woven together perfectly to create a complex, engaging plot, that makes the book hold your attention no matter what, to be honest the nuclear fire from the book could have happened and I wouldn't have noticed until I'd finished reading the book and looked up like "......oh". As the plot  is complex, the solution is also complex it's not as simple as killing Zach off and getting rid of him, because then Cass will die, and it's the same with every Alpha bad guy mentioned in the book, because as Cass reminds us, you're actually killing two people.

It's really quite an epic journey, you go from the beginning with the background to the keeping rooms to on the run to New Hobart and so on. You don't see just one small section of the world, you see a vast expanse of it, and can see it very vividly. So much happens, and there's always something going on, like I said, a chapter always ends leaving you wanting more. There are plenty of twists and turns that you don't see coming, some that you maybe have an inkling of but haven't worked it out, but there's none that you can flat out guess in all their detail. Some of them are incredibly sad and heartbreaking, and I wasn't expecting it so I just sat there all shocked, mouth hanging open, totally gobsmacked. I should have guessed about Kip, but I didn't, and it's because it was totally unexpected, but also because you're so engrossed in the story, you don't really have much time to theorize, cos you're turning pages too fast!

There's a smidge of romance, juuuust a smidge. But don't worry, it's not the main focus of the plot, it's woven in very subtly and develops naturally, it's not there for the sake of it. I loved how when you where reading, you felt like you where in the middle ages or a similar time when everything was very basic, but then they'll mention the Before or electricity and machines and you're suddenly jolted in to remembering that, no, this is the future after we've all destroyed the Earth.

Fire Sermon ends, not on a proper cliffhanger really, but the next book has been subtly set up, and you have a slight idea of what's going to happen, but judging from this book, that will only be a small part of it, or the goal of the characters, there will be so much more going on, and there's a couple of threads left to be picked up in the next book. You're left desperate for the next book, you don't want to leave the world and the characters, and you so badly want to know what happens next, it's going to be torture waiting for the next book!

The Fire Sermon is unique, full of action, and incredibly well thought out and complex, while still being engaging and fast paced. You're thrown in to two times, the future, that is incredibly like the past in moments. I for one am incredibly excited about this book, and the series, it's firmly lodged itself in to my list of favourites, and it's one of those books you read and re-read and keep re-reading until pages are falling out of the binding! And each time you read it, it's going to be like you're reading it for the first time, I  guarantee! Go on....give it a whirl!