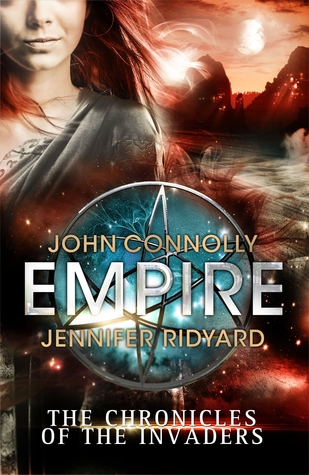 Syl has been made to live in the Marque with the rest of the Sisters, but nothing is as it seems, something is going on, and when a Sister disappears and a hand looking surprisingly like hers is found in a creature, she starts to investigate in earnest, but what she finds is shocking. Not to mention the fact that the Sisters are being trained to hurt rather than to help, and Ani is pulling away from her.

Paul has risen to a high position of command thanks to his exile, when he and his crew rescue an important Illyri, they are not only thrust in to danger, but they're on the path to discovering another secret about the Empire, and when it's dealt with, there's no going back. Syl and Paul are once again brought together, and they can't forget what they've learned.

Join Syl and Paul as they continue their fight against the strange creatures destroying the Illyri.

Sooooo, I loved this book, and it surpassed the first book in my opinion, as you can see from my rating! I was drawn in from the beginning, I loved the pages at the beginning that where taken from the Chronicles, and detailed what had happened before, sort of like a "previously on..." thing, but then there's one line at the end that makes you so excited to read on, and you know somethings going to happen! I also loved the "property of the Marque library" stamp, and the other touches that made it look like it was from this ancient, separate book! There was always something going on, if it wasn't action, it was something that was adding intrigue, as I tried to work out what was going on, what Syl was going to discover and so on. I couldn't put this installment down, and I never found my attention wandering or being bored.

I loved all the unique things in this book, the aliens, the history and so on, so I was excited to learn more about it in this installment, we got more history about the Sisterhood, we learned more about the world, and the other planets, and the Civil War and everything. I loved seeing more of the unique creatures, even as terrifying as they where, I loved trying to picture them, and with the authors words, it wasn't that hard!

I continue to love the setting, while we didn't see Edinburgh this time, we got to see space. And it was awesome, and so well described, you could picture everything clearly, you felt like you where just hanging out with the characters, wherever they where. The atmosphere was very well done as well, the Marque had a different atmosphere to wherever Paul was, but both could be felt, and both surrounded you, the mystery, the danger, the tension, and so on. I loved seeing more locations in the world the author has created, Marque, other planets and so on, each was well described without so much detail that the pace and flow where disrupted.

I was sad to leave the Resistance behind a bit, there was an entire part that was all about Meia, and she was meeting with the Resistance, because a power change was happening which is going to be interesting to see seeing as Ani has now changed, and her Dad knows the truth you know? But anyway, you saw a little bit of it for that part, and the Green Man again, but I'm sad we didn't see as much of it before, because I thought it was so awesome and WW2 like, and I'm hoping to see more of it in the third book. I think, while I was sad there wasn't much of it, it still fit in it's part, and the absence wasn't at all odd, because this was more about the aliens than the first book was, and the aliens upcoming war.

I'm still loving the characters, particularly Meia, I'd missed her and when it got to her part I was so excited, and there was a nice twist that I didn't see coming and I was like "AAAAAHH" and yeah. The characters are all well written with depth, and in this book you see them develop more, particularly Paul and his brother, considering their training and the situations they know find themselves in. I felt like Paul's brother came in to his own more, he was the pilot, he was more sure of himself and everything. Paul was less "eeeh" for me this time. He was less bland, he was more interesting, there was more to him, he developed for the best I think.

Syl I wasn't too sure of in the first book, but ultimately I'd enjoyed her development over the book and I was excited to see what would happen next for her. She continued to be underestimated by everyone, and I loved Syl even more in this book, I connected to her better in this one, and I loved how badass she was. Her powers have developed a lot more, and she's a force to be reckoned with, along with Paul and the others, the third book is going to be interesting.

I actually really liked Ani in the first book, but in this one I was disappointed with how easily she allowed herself to be manipulated and how immature she was, I mean she had no loyalty to her supposed best friend, she dumped Syl every single time and went off with the others, didn't believe a word she said, and when she saw with her own eyes, what the others had been up to, she went off on Syl for killing them, even though they'd just murdered loads of people. Ani's gone off not wanting to see her again and blah blah, and I think she went from a potential interesting character, that paired with Syl, could have been an incredible duo in the upcoming fight, to a kind of incredibly pathetic and petty character. Do not like at all. Hopefully in the third book she'll get her act together because I was getting so annoyed on Syl's behalf.

So, I think this installment was better because there was stuff going on from the go, stuff to be worked out, action and so on, and there was none of this misleading information, and the romance wasn't in your face with all it's oddness and just not really working. Paul was back to being true to himself and his character, as was Syl, and the romance was still there a little bit, they're thinking about each other, but I think after the odd romance blooming from nowhere, them being apart with the little mentions of it, worked to re-establish the characters on their own, and helped you get to know them both separately and come to love them, so when the romance kicks back up in the third book, I think it's going to work better than in the first book!

The narrative was engaging, I loved the ominous comments, and the fact it wasn't from any of the characters perspectives. I liked how it gave you little tidbits, and how more information about the history wasn't just stated, it was give to you by conversations, or characters researching and so on. I liked seeing more of the political struggle going on with the weird alien things that where attached to the Illyri. The third book was set up subtly, and it's set to be an explosive installment, I'm really excited for it because there's going to be so much going on it, and so much coming together and kicking off and eee!

The plot is complex, there's two plot lines going on, three actually, Paul, Syl and Meia, and all three are woven together perfectly. You're kept guessing, you don't know what's going to happen next, there's plenty of plot twists that you don't see coming, and it's always nice to be surprised when reading, and I couldn't put the book down at all, I was totally engrossed and sucked in to the world by the plot and the characters and everything. There where so many threads going on with the Marque and the thing going on with Paul and the stuff happening with Syl's dad and back home, there was mystery and intrigue and action everywhere.

Empire has surpassed the first book, it's everything I hoped it would be and more, and the lack of romance barely had time to be noticed as there was so much going on, and so much for you to try to piece together and work out, but you end up being surprised anyway! I'm so excited for the third installment!
Posted by Alisha at 10:00