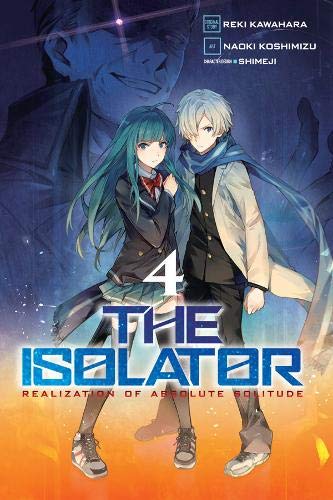 
Minoru and the rest of the SFD have pinned down the whereabouts of the Ruby Eye known only as Ignitor. In order to avoid a repeat of their past mistakes, they close in on their enemy with a flawless plan, but even so, they may not be ready for with the Ignitor has in store for them...
We have a sense of tension from the start of this volume as Minoru and Yumiko engage in a light bit of breaking and entering, and a creepy vibe along with allusions to a "smell" had me on edge right from the start....I will admit I did jump a little when it was found.
But we finally have a lead on Igniter! As such we gear up to face him but Minoru has some doubts and I had to agree with him to be honest. Meanwhile Refractor is brought in, aka Komura, I would say that I'm looking forward to seeing more of her in coming volumes...but I believe that this fourth volume is actually the final volume so I'm a bit disappointed they brought in an interesting new character right at the end.
We learn a little more about Yumiko's past and she and Minoru...bond? If you can call it that. He does get stuck in his head with some things from the past and she helps him through it so I guess you could say they finally come to an understanding. Olivier's power is also revealed along with an interesting plot thread involving he and someone called Trancer, it looks like he's keeping a secret but once again...final volume!
We get an explosive battle and that combined with his bonding earlier in the volume means Minoru is finally starting to fit in and he manages to extend his power, showing us how far he's come from the wilfully isolated guy he was at the beginning. On some level, he's starting to let the team in and starting to belong and I was cheering for him. Of course he's not at the level that he can replicate doing it yet but there has been some progress there! Plus a possible romance being set up?
While this volume goes some way to wrap things up by wrapping up the Igniter arc, and showing us how much Minoru has changed and that he's starting to fit in and so on, considering that as far as I'm aware this is the final volume, it does leave some threads dangling. A new character we won't get to see more of and learn more about, and Olivier's secret. Granted if you read the light novel then this is probably a satisfying conclusion to the manga adaption of this portion of the story, but if you read the manga only you may be left feeling a little disappointed that it's ending here!
Posted by Alisha at 10:00