Manga: The Case Study of Vanitas 5 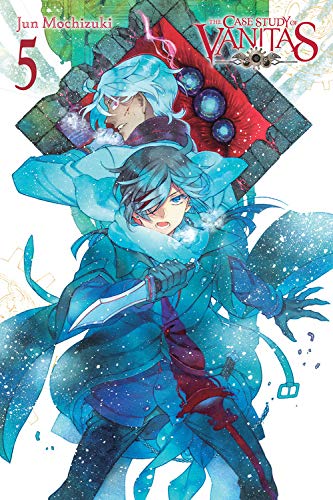 
The Beast of Gévaudan, which once plunged France into terror, has risen again in the nineteenth century. As Vanitas and the others investigate the relationship between the Beast and the vampires, they find their way barred by the paladin Astolfo and Jeanne, the Hellfire Witch. Who is it that laughs in a world blanketed white...?
We pick up where we left off in the last volume, and thankfully we don't have to wait long for Vanitas to realise what's up and put some pieces together! Unfortunately it's a bit too late and I'm not viewing Noe is a ticking time bomb, waiting for him to go off and do whatever it is that Ruthven is after.
I have to say, I'm loving Roland as a character, he's doing a little bit of research in to the history between vampires and humans so thanks to him, we get to learn some too! Specifically we get to learn about the incident with the Beast of Gevaudan which involved Ruthven and was the first time the Church actually worked with vampires. Of course...the beast is back for this volume.
As much as I do like Roland, and appreciate that his beliefs have changed, I do wish he'd be careful before he gets himself in to some hot water. He's really out here, casually threatening Olivier as if it's not a big deal!?
Volume 5 gives us some more insight in to how vampires work in this series, with the blood drinking and what the rules are, or perhaps it's a recap and my memory is failing me. Either way Noe is having some trouble controlling his want for blood. Presumably all thanks to Ruthven, and Vanitas...he's really not impressed and has a very direct and blunt response to him. I love the two of them working as a team, and I'm really not here for any rift forming between them because of it. So far, Vanitas appears to have let it go, and they're their usual selves pretty quickly.
I absolutely loved that Dante and Johan tagged along for the case, and I live for Dante and Vanitas' bickering. We also get to meet a new character in the form of Astolfo. Astolfo is the Chasseur assigned to the Beast case, who's looking forward to exterminating it...and the vampires in the region. Astolfo is kind of psycho to be honest, and has killed a load of humans too.
Alongside all of that we get an intriguing plot twist with Jeanne, she has a connection to the Beast who turns out to be a curse bearer, and I'm intrigued to find out more about their past and their connection. We get to look at it a little bit in this volume but I'd love to delve deeper in to Chloe, in particular. But the twists don't end there because....we appear to have wound back time to the original incident? Or someone's been pulled in to a time bubble? Or the past? I'm not sure.
Once our characters enter the forest to look for clues, it all goes a little bit horror movie and of course Noe is the first one to wander off and get separated. Disappointed but not surprised. I continue to love Noe and the contrast between he and Vanitas. I continue to love Vanitas who was at his best this volume, winding up Astolfo and looking very smug about it.
There's a nice amount of action to go with the creepy, horror movie vibe we get at points. Noe is up against the Beast and trying to stop Jeanne from killing it because Vanitas needs to get his hands on a curse bearer, and Vanitas is up against Astolfo with Dante's help.
Volume 5 starts off with some disconcert before heading in to creepy, horror movie territory with the talk of "the Beast" before leading us steadily in to the action. We end yet another solid volume with our characters separated, Noe is again in some potential danger while Vanitas is having a bit of a romantic moment. The plot is steadily progressing forward, bringing in more intrigue and new plot threads with each volume and I'm excited for this story arc as it's taking an actual historical event and twisting it to the story and I have so many questions I can't wait to have answered!
Posted by Alisha at 13:00