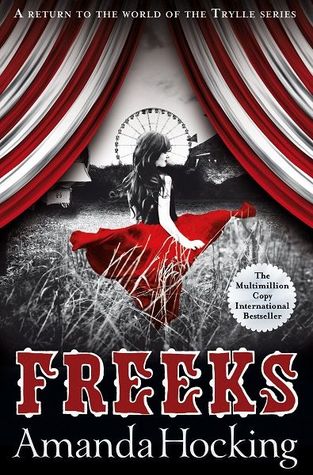 Welcome to Gideon Davorin’s Traveling Sideshow, where necromancy, magical visions, and pyrokinesis are more than just part of the act…Mara has always longed for a normal life in a normal town where no one has the ability to levitate or predict the future. Instead, she roams from place to place, cleaning the tiger cage while her friends perform supernatural feats every night.When the struggling sideshow is miraculously offered the money they need if they set up camp in Caudry, Louisiana, Mara meets local-boy Gabe…and a normal life has never been more appealing.But before long, performers begin disappearing and bodes are found mauled by an invisible beast. Mara realizes that there’s a sinister presence lurking in the town with its sights set on getting rid of the sideshow freeks. In order to unravel the truth before the attacker kills everyone Mara holds dear, she has seven days to take control of a power she didn’t know she was capable of—one that could change her future forever.

I wasn't really sure what to expect with this book going in, but I was intrigued by the Carnival element. I certainly wasn't expecting the supernatural elements, the synopsis I read...well I assumed it was just a regular serial killer type thing and it was going to be a murder mystery at a carnival, so I was surprised, but I'm not sure if it was a good surprise or not.

For most of this book, I was a bit meh. I did contemplate DNFing it but the creepy supernatural element made itself known and I decided to hang on a bit longer. It essentially saved the book, because I finished it but I wasn't all that invested in the book. I wasn't eagerly turning pages. I was just kind of...meh about the whole thing.

I love all things 80's and I have a penchant for 80's movies and music, but I was sad there wasn't more of that included, more references and things. At one point the time period was kind of indistinguishable from any other time period. It didn't stand out to me as distinctly 80's except for maybe one or two times. But then I did resort to skim reading this book just to finish it so perhaps I missed something.

The romance was kind of cute, but it was a bit insta lovey and I don't really like insta love except for in very rare cases...and this wasn't one of them. I kinda felt like it was there just to be there. I found the book to be very predictable, and like I said...it never really grabbed me and had me gripped. I was just mildly intrigued and wanted to know what the creature was.

I did like Mara and her determination, her sudden switch to budding Buffy was a bit swift. The other characters are a colourful bunch with different abilities and backgrounds. The book was darkly atmospheric at points. My favourite part was probably the last part, when the mystery was coming to a head, and things where happening, and everyone started gearing up for battle. But the rest of the book for me was just a blur that I genuinely can't remember all that much about and I only finished it the other day.