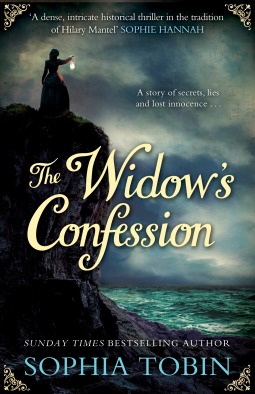 Delphine and her cousin Julia are running from a past in New York, something to do with Delphine and who she really is. After spending time in London, they decided to head to Broadstairs in Kent for the summer of 1850, a nice little fishing village. Or so they thought. The town has secrets, and a darkness all of it's own, that's coming back from the past to haunt the present, not everyone had a nice childhood. When a girl is found dead on the beach, with a mysterious word written in the sand next to her, the authorities (of a sort) try to pass it off as an accidental drowning, but when another girl dies, and another attempt is made, it quickly becomes clear there's a killer in their midst. Secrets are everywhere and not everyone is as they seem....

Okay so I read The Silversmith's Wife from the library, because ya know...history geek and all that, and I can't resist a historical book of any description, anyway, I totally loved it, and so when I was asked if I'd like to review this, I pretty much couldn't say yes fast enough. I wasn't disappointed.

The thing I loved about this book was how dark and compelling it was, with the atmosphere rolling over you as you enter an incredibly vivid world, created so fantastically while being historically accurate. There are secrets everywhere, people have issues, serious issues that are written about with all the respect and seriousness they deserve, I won't say much as to not spoil the story.

I pretty much started reading this, sat back, and went along for the ride, I went wherever the author took me. I had no idea what was going to happen next, I had no idea who the killer was, and I had no idea any of the twists and turns where coming up, I was surprised at every turn and I loved the not knowing. I mean I tried to work out who the killer was, but I'm kind of useless at this detective malarky, so I was waaaaay wrong, like I'm sure the author intended, I was thrown off by the whole writing thing...and the boat....and yeah. But who wants a mystery you can work out? No-one.

I loved how the killer was one mystery, but so was Delphine, and who she was and what happened, I liked that there where kind of multiple storylines going on, the killer and the search for him or her and then Delphine and her life and what she was running from and I LOVED the way the book started with the letter, I mean it builds intrigue and anticipation like nothing else, as do the little bits go the letter at the beginning of each chapter, that then smoothly intersect in to the narrative in time for the ending, so you can see what happens next, after the letter has been sent.

I'm probably not making much sense, but damn I love Sophia Tobin books! Tobin really gives you one hell of a feel for and insight in to the time and how women where treated, and how society acted, better than any other book I've read recently. The narrative is smooth and isn't broken up by endless pages of description to create the world she has weaved, she's done it with a couple of sentences. She's that good. Not to mention the fantastic cast of characters, that intrigue you, and help to keep you engaged with the story....well...them and the killer plot.

Sophia Tobin has given us another gripping book, full of history and mystery (one day I'll stop rhyming today is not that day), you won't be able to put the book down and the atmosphere will envelop you and at times chill you. Word of warning....I'd set aside time to read this in one go! I can't wait to see what the author brings us next! I'm pretty much a fangirl of hers after only two books!
Posted by Alisha at 10:00