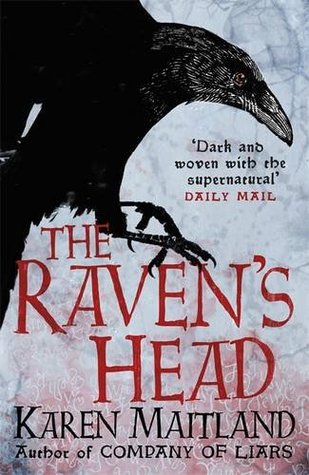 Vincent is an apprentice to the Librarian of a Lord, but in truth he's more like the Librarians person slave. When their Lord's legitimacy is called in to question and the Librarian "finds" an ancient tale to clear up any doubt, Vincent stumbles upon the truth and it's powerful enough to destroy his master. But Vincent makes a mistake, his attempt at blackmail backfires, and he finds himself being hunted, on the run from certain death if he's caught, and in the possession of an intricately carved, silver ravens head. A head that appears to talk to him, and appears to be steering him in a certain direction. Any attempt to sell it, fails, no-one wants the unlucky omen. But soon Vincent finds himself in a town, a town where boys are being left with the White Canons, who are most certainly up to something, what with boys disappearing in the night.

Vincent tries to get rid of the bird to Lord Sylvain. This particular Lord is an alchemist, one with an all consuming obsession with bringing back his dead daughter. Vincent finds himself in danger because Sylvain and the White Canons have this little idea that Vincent is a predestined sacrifice, to die in their experiment.

So, I think this is my favourite Maitland book so far, I thought it was Vanishing Witch, but nope, totally this one! The Raven's Head is delightfully dark, and this darkness is woven throughout the plot, a plot that is gripping and twisting, written in vivid detail. Not to mention it's incredibly creepy at some points! The thing I love about Maitland's books, is that there's clearly been a lot of historical research put in to the book, and this research, woven in to the writing and descriptions, gives you a vivid painting of the time, you're walking in the world created, pretty much, and the atmosphere just swallows you.

The book is fascinating, and at times unbelievable, you know, it's totally unbelievable that certain things would have been the norm back then, and it kind of stuns you for a minute as you take it in...realize it was normal back then, and then picture living in that time with things like that going on. The pace is just right, fast paced, but not rushed, and it's not dragged down with endless reams of information.

There's different points of view, each one changes at the right moment, each one adds something to the story, rather than just going over the same scene, if you know what I mean. There's a larger plot going on that's complex, and each character is a different component that brings something to the story, to the plot. It really is set in an interesting time, and it truly drew me and hooked my attention firmly in the story and setting, I seriously loved all the history and the stories and the superstition and all the magic woven in to the story, because there's loads of each to keep you intrigued! Not to mention the little bits at the beginning of the chapters, that are to do with alchemy, that are all real pieces of information.

The Raven's Head, understandably and probably obviously, has lots of birds in it, lots of different birds, and I thought it was a nice touch to have them throughout the book. I loved how the ending left you wanting more, you want to know what happens next, but you can't, because there's no sequel, so you have to decide for yourself, the cycle is clearly continuing and you're wondering, how long will it continue? Will it stop? Will they achieve what they want? It's truly hard to guess what's going to happen next, because there are stories within the main plot, particular a certain characters parents, and it's impossible (at least for me) to work out the connections, the links and what's going to happen with the next twist.

Seriously, I can't say this enough but Maitland will have you utterly enthralled and enchanted with her storytelling, and how she uses her words to create beautiful but dark images, and twist so much and so many different threads in to one plot that keeps you glued to the page. Maitland had me utterly fascinated by the time period and yearning to know more about it, more about alchemists of the time, and I was quite sad to leave the story, but also, despite wanting to know what happens to the characters next, you feel oddly satisfied with the ending.

Two words to describe this? Dark and magical. And you need to give it a go! Having said all this, despite how much I was fascinated by the time, if Doctor Who shows up with his Tardis, this is the last time period I'd ask to visit!