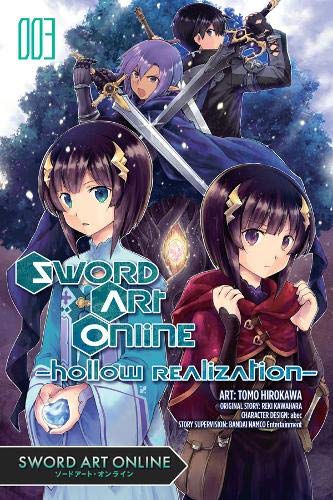 
When Kirito, Asuna, Silica, and Premiere are sucked into a world where dark elves and demons abound, the four head to the Forest of the Holy Tree, which has been tainted by demon sorcery.
Kizmel pops up and we pick up right where we left off once again! This time everyone ends up separated as Asuna and Kirito get pulled in to a side quest, with Silica and Premier being pulled in as well albeit initially separately. It was nice to get to see a fair bit of Silica for once as we rarely do more than we do as just part of the ensemble. It was also nice to see Kizmel teaming up with our characters again although I was initially a little bit worried about her and allegiances.
The main focus of this volume is a side quest involving a demon and a stone curse along with the dark elves, obviously. There's also some super shady goings on involving Genesis and his little buddy Tara. We do speed through the quest a little bit but it's got a nice amount of action before things start to slow down again and there's talk of creating a guild. Plus we have Seven popping in to add something ominous to proceedings because of course something potentially shady is going on.
The volume starts off quite pacy with a nice amount of action but then slows down while introducing lots of intrigue and a general sense of foreboding as things step up in one regard and we're definitely left wanting more.
Posted by Alisha at 10:00