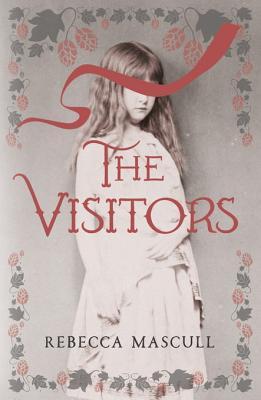 The Visitors is Rebecca Mascull's debut book, and what a debut it is. Intrigued as I was by the synopsis, I wasn't entirely sure what to expect from The Visitors. On the one hand, it was sure to be an interesting look at the deafblind in Victorian England, a subject not much, at least to me, is known about, and I'm quite the history geek. There was also the promise of a friendship, love, adventure and a dash of war. The ghosts, however, are what threw me. Like I said, I didn't know what to expect, I wasn't sure if it was going to be full out creepy or just sort of Mediatory/Meg Cabot-y.

Mascull takes us to late Victorian Kent and it's hop-fields, and blazing South Africa, the backdrop for the Boer War (something I feel this book educated me on). Our narrator is Liza. When we first meet her, we come to understand, heartrendingly, that as she is deafblind, she cannot communicate with her family living in a world of darkness but for the voices of The Visitors she hears in her head, obsessed with the last day they died. In a lucky case of right time, right place, Liza meets Lottie, whose sister was like Liza. Lottie offers Liza a way to express herself to her family, and to at long last communicate with them.

Liza's intelligence means she fast picks up finger writing, along with her father, and eventually, her mother, but it also means she soon becomes able to write, read braille and make sentences with cut out letters. Finally able to communicate with her loved ones, a whole new world is opened up to Liza as she learns about the world. Even more so when she is finally able to see again thanks to a kindly doctor. With this sight, she can finally see her Visitors. When the Boer war emerges, Liza will lose her love, but she'll discover more than she ever knew about her Visitors, and how to help them, as well as saving a life.

I cannot begin to explain to you how truly astounding it is to read a book from the point of view of a little girl who is deafblind. Things we do, without even thinking about it, that are such a challenge. How Liza can recognise people by their handshakes, know things by smell and so on, pick things up from facial expressions, it was fascinating. It was also fascinating to learn about how the deafblind where treated at the time, what was available to them, what could be done surgery wise for them. It was inspirational watching Liza learn different ways to communicate, including signing, which I had no idea went that far back!

I mean the book was beautifully written, particularly the descriptions of things from Liza, especially after she can see again, I mean I see some of the things mentioned and I'm like "meh, see it every day, it's not that special" but everything is so precious and new to Liza and described magically and with so much wonder. It makes you want to sit outside and just look at the world around you, really study it, and see the beauty in things the way Liza saw beauty and wonder in everything.

The beginning of the book, when she's frustrated and unable to communicate with her family is so heartbreaking, but as you watch her learn and discover the world, it's truly beautiful to read. I've got to say, Liza is such a strong character, willing to learn, incredibly intelligent, and so kind hearted to others. I loved her friendship with Lottie, it was written so perfectly, and you got to watch their bond grow, and Lottie really did change Liza's life, and watching how Lottie's family acted as if she was an honorary family member was touching in more than once place.

When the Boer war started, and Caleb, Lottie's brother and Liza's one time lover, enlists and is shipped off, Mascull gives a surprisingly in depth look at the war, considering that obviously, Liza is not there. I thought it was very well done and slotted in with the narrative, it kept the book fresh. We get a few letters from Caleb, not only describing events leading up to a plot point, but describing what the war was like, and what soldiers thought of the war.

I knew nothing about the war in detail, which is kind of shameful, I knew of it obviously, but I was fuzzy on the details. When we find out Caleb has gone, the author slots in a little chunk telling us what the war is roughly about, which was concise and didn't break the flow of the narrative, but still managed to be very informative. Caleb's letters built on this knowledge in an interesting way that didn't bore you with reams of information, you got to see the war from his perspective, and how the newspapers at the time portrayed it differently, as they tend to do when this sort of thing happens, I mean look at WW1 and WW2.

It's clear the book has been well researched and that Mascull is adept at filtering out the most important and relevant chunks of information, rather than trying to chuck it all in and bore us to death like some. The book was very fast paced and easy to read to be quite honest!

The Visitors where intriguing and portrayed in a unique way I haven't come across in any other book. As i'm sure you've guessed, they're ghosts of the dead, I was expecting fully creepy from the way the synopsis was written, but they weren't really? I liked how the author had lore for them and rules, like suicides don't have ghosts, and how they would be obsessed with talking about the day of their death or the hours before. The whole hearing voices of their loved ones to calm them so she could then ask them if they wanted to move on was mildly heart breaking, but not as much as the scene with her father. Man I was not expecting this much emotion!

The Visitors is an emotional and inspiring read of a deafblind girl and her determination to be able to communicate with those she loves. A beautiful friendship, a brutal war, and beautifully written, The Visitors may or may not cause the odd tear or sniffle! You live with Liza as you see her grow up, learn, love, lose and live.