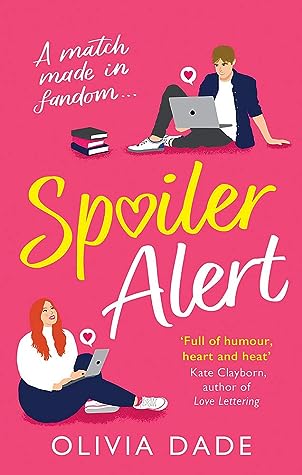 Source: Copy courtesy of the publisher in exchange for an honest review!

Marcus Caster-Rupp has a secret. While the world knows him as Aeneas, the star of the biggest show on TV, he's known to fanfiction readers as Book!AeneasWouldNever, an anonymous and popular poster. Through his stories, Marcus is able to get out his own frustrations with his character, especially the ones that feature the internet's favourite couple to ship, Aeneas and Lavinia. But if anyone ever found out about his online persona, he'd be fired. Immediately.April Whittier has secrets of her own. A hardcore Lavinia fan, she's hidden her fanfiction and cosplay hobby from her 'real life' for years - but not anymore. When she decides to post her latest Lavinia creation on Twitter, her photo goes viral. Trolls and supporters alike are commenting on her plus-size take, but when Marcus sees her pic and asks her out on a date to spite her critics, she realises life is really stranger than fanfiction.Even though their first date is a disaster, Marcus quickly realises that he wants much more from April than a one-time publicity stunt. And when he discovers she's actually Unapologetic Lavinia Stan, his closest fandom friend, he has one more huge secret to hide from her.With love and Marcus's career on the line, can the two of them stop hiding once and for all, or will a match made in fandom end up prematurely cancelled?

Ah, that opening scene had me flashing back to the days I spent filming a certain movie and all of the blood, sweat and tears that I poured into it. Vividly. It was certainly an opening that hooked my attention and pulled me in and I genuinely think I'd probably watch that show if it existed! Or at least read the books!

I knew I was going to love this book based on the opening alone. The narrative caught my attention and had me giggling within a couple of pages, and it made my geeky self happy because I was 100% sure that Dade was having a little bit of a GoT reference. All I'm saying is...it reeked of GoT and a certain pair of showrunners that we all love to hate for a certain season finale. I couldn't help but wonder if the actors in real life felt the same way as the actors in the book.

I lived for all the mentions of the other movies and shows that Marcus has starred in, along with their descriptions AND the script extracts. I was howling at some of them, they were so brilliantly cringey I can't believe Dade came up with them! I can't begin to imagine how much fun Dade had coming up with all of these and then writing little extracts for them, I was snickering to myself so much while I was reading them! I also loved the fan fiction extracts, complete with AO3 tags! My nerdy self was so, incredibly happy reading this and I could more than relate to the fan fiction and fix it fics and so on. It kind of reminded me why I love fan fiction so much and how much fix it fic I read for a certain show at one point when it took an annoying turn!

Spoiler Alert is a fluffy romance, it was cute and sweet and funny...but it also had a depth to it and the characters that I hadn't entirely been expecting. April and Marcus both had things to overcome and work through, and while the romance was brilliant and I thoroughly enjoyed it, the emotional depth to the story really made it for me! Marcus puts up this false image to hide himself away so everyone thinks he's stupid but he actually has Dyslexia and his parents weren't too kind to him about it. They're super smart and they got very frustrated and lately they've been belittling his choice of roles and don't seem to realise what they're doing or that it's wrong. April has a mother that loves her dearly, and truly is just trying to look out for her...but is hurting April in the process because of her unhealthy views on weight and food that have been drilled into her. In short, they're both dealing with emotional abuse from their parents and I thought it was tackled really well.

The way April went to  her mother and the conversation they had about it really hit me, and I thought it was a fantastically written scene. Not to mention the fact that there was no insistence that parents have to be forgiven and you have to remain in contact with family members that hurt you. I really loved how the entire situation was handled, and I loved watching April and Marcus have real conversations about this. I also liked that any misunderstanding was talked out pretty quickly and there's lots of admission of fault that I really respected from the characters.

April I utterly loved! She's so confident and such a strong character throughout and she never doubts her self worth and never loses her self respect throughout the book. I rooted for her 100% and I completely got where Marcus was coming from too. I really enjoyed watching them come together and overcome things together, but I also loved the way they loved themselves and Marcus especially came to have and believe in his own self-worth.

And finally...our support characters. I LOVED all the fights amongst the cast members in the group chat that they had! I had a note written to myself that I'd love a spin off book about Alex because I think he might be my favourite but then when I got to the end of the book and the note that was there...my wish was granted and I already can't wait for that!

I had a really good time reading Spoiler Alert, I laughed, I got emotional and I looked forward to picking the book up every single time I had to put it down. I love a good dose of the nerdy and the inclusion of the fan fiction element had me feeling right at home and nodding along with certain aspects to it that were described! I also pretty much equated the show to GoT and it brought back a rush of feels along the lines of...'I dedicated how many hours of my life for THAT ending?! You've got to be kidding me'. But the thing that stays with me the most about this book are the characters and the struggles that they overcome throughout the book.